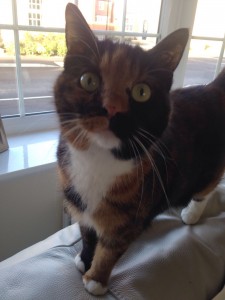 When you plan your holiday, why not get Safe and Hound to look after your happy cats in their favourite place, at home!

The answer is “none of the above”.

There are some really caring cattery owners and some catteries have quite modern pens.
So why do cats really hate catteries?

The answer is pure and simply that cats are territorial animals. By this we mean, over many thousands of years, cats have been genetically predisposed to be solitary animals and to reign over a large territory (unlike dogs which are basically “pack” animals).

This explains much of a modern cat’s behaviour, for example, even though cats can be sociable, they spend a great deal of time alone because they are basically solitary animals. They wander over large distances across the neighbourhood since in the wild they need a certain minimum size of territory to supply an adequate amount of prey.
They will fight other cats to defend their territory and with that, their food supply.

Of course, thanks to very caring and doting owners, in modern times, domesticated cats do not have to hunt prey in order to eat, yet many cats will hunt prey, but why?

Because, as already stated, they are genetically predisposed to do certain things, including hunting prey (even though these days, they don’t really need to).

What does a cat’s territory mean to a cat?

In a word – EVERYTHING!

A cat’s home environment and the immediate surrounding area is “marked” by the cat so when most cats are forcibly taken away from their familiar home environment (their central territory), they will become stressed, unhappy, sometimes stop eating and are quite unable to adjust to their new surroundings. It’s not so much the fact that they don’t want to be taken to a cattery, it is more to do with the fact that they do not want to be taken anywhere away from their home territory.

So it is simply common sense and far better to care for a cat in its own home rather than take it somewhere else to be cared for.  Why would anyone want their cat to be stressed and unhappy when it could be calm, relaxed and contented?

So let’s not blame cattery owners for supplying what is, in effect, an inappropriate service – after all, they are only supplying a service that a proportion of cat owners (mistakenly) believe is required.

So when you plan your holiday, why not get Safe and Hound to look after your happy cats in their favourite place, at home!

The first language a kitten learns is that of smell. It is blind, deaf and defenceless but it has well-developed senses of smell and touch (including warmth detection) to guide it to the mother cat’s nipple. It has been proposed that each kitten recognises its own scent on the nipple and aims for the same nipple each feeding time. However in my experience, the larger, more vigorous kittens usually head for the nipples nearer the back legs, so this ‘own nipple’ theory may just be kittens trying to get to the most productive nipples. In litters with only 1 or 2 kittens, the front nipples may be completely unused.

END_OF_DOCUMENT_TOKEN_TO_BE_REPLACED

What’s in a meow? (Sound communication in the cat)

It has been theorised that living alongside humans has meant that the process of evolving a domestic subspecies from a wild ancestor went hand-in-hand with increased vocalisation in domestic cats and research has shown that the different sounds a cat makes are extensive. There are between 16 to 20 different types of “meow” which differ in pitch, rhythm, volume, tone, pronunciation and the context in which they are used.

END_OF_DOCUMENT_TOKEN_TO_BE_REPLACED

Most people realise that you can tell how a dog is feeling by its body language, but did you know that the same goes for our feline friends?