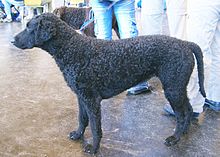 The Curly-Coated Retriever is a large dog, the most distinctive feature being his coat. The water-resistant coat is very distinct coat with small, tight, curls that cover every part of the body accept for the forehead, face, front of forelegs, and feet. The coat protects the dog from brambles and icy waters. The Curly-Coated Retriever is a high-energy, but also very intelligent dog that needs a lot of exercise, both mental and physical. Preferably involving swimming and retrieving, which they love.

easy to get along with, this breed is loyal and eager to please. Proud and confident, very intelligent and trainable, which means it needs quite a lot of stimulation to remain contented. They have been used in competitive obedience and agility, but are not as predictable as some other breeds, as they can get bored with a the same actions over and over again. Curlies do not fully mature until they are about three years old and can be willful with meek owners. Make sure you are the dogs firm, but confident, consistent pack leader to bring out the best in their temperament. The Curly-Coated Retriever is affectionate, loving, and excellent with children. The more mental and physical exercise you give them the calmer they will be. Socialize them well with people and other pets at an early age. Without proper balance in their life they can be reserved or timid with strangers.

They make good therapy dogs. Curly-Coated Retrievers make an ideal partner for an active, outdoor-oriented person who also wants a loyal family companion. They make good watch and even guard dogs if they see the family is threatened.

The Curly-Coated Retriever is a large, hardy dog, who’s body is slightly longer than it is tall. The head is longer than it is wide. The topline is level and the neck is strong and slightly arched. The muzzle is wedge-shaped tapering, rounding at the bottom. The stop is shallow and sloping. The nose is black on black dogs and brown on liver dogs, with wide nostrils. The teeth meet in a scissors bite. The hanging ears are rather small. The large, predominate, almond shaped eyes are black or brown in black dogs and brown or amber in liver dogs. The chest is deep but not overly wide. The tail reaches approximately to the hock and is covered in curly hair, carried straight or almost straight and is never docked. When the curls on the tail are trimmed the tail tapers to a point. Dewclaws are usually removed. Curlies only come in two colours black or liver. The coat may have a small white patch, but it is not desired in the show ring, but this doesn’t affect a good working dog or pet.

The exact history of the breed is lost in time, but it is thought t obe one of the oldest  retriever breeds going back over 200 years. Several early ‘types’ of retrievers existed, but most have died out over the years, for example  The Large Rough Water dog, Tweed Water Spaniel, Lesser Newfoundland, to name a few together with a few that remain, the Irish Water Spaniel, and dogs from the Continent, the Wetterhound, Barbett, and Poodle. Written accounts of dogs similar to the curly coat  date back to 1803. The Curly is likely to have been the first breed used for serious retrieving work in England.

The curly was first exhibited in the show-ring in 1860, and four years later there were separate classes for the wavy coated  (now called ‘flat coated retrievers) and curly coated varieties. They were very popular during those early years and were used on many of the large estates, however the war years and the introduction of the Labrador were to greatly reduce their popularity. Their fortunes have ebbed and flowed throughout the years with registrations as low as 5 in 1919 to the record of 168 in 1994.

Each pure breed of dogs has its own particular hereditary problems some minor, some impairing, and some possibly fatal. Some may show a very strong hereditary basis and others not much more than a tendency to” run in families”. The Curly-Coated Retriever is no exception and unfortunately as seen in other breeds, the problems tend to multiply as the breed continues to increase in popularity and there is an increase in indiscriminate breeding. Failure to screen for these problems before breeding often results in the “doubling up” of unfavorable genes, and the results are distressing for the buyer and dog alike. Average life expectancy is 8 to 12 years.

Sometimes referred to as the “Curly Coat Problem”. In mild cases, the patterning may appear once and then never again when the coat grows back in. While mildly affected dogs generally lead normal lives, it is an indicator of more serious trouble, as it is caused by some type of auto immune problem. Affected dogs are more likely to have allergies, reproductive problems; in its severest form, it affects the growth hormones and the dogs mature at about 40lbs.
Very often dogs with patterned baldness will have good coats as a puppy, with the bald spots appearing at sexual maturity. Bald patterning appears on the backs and/or insides of the hind legs, and/or on the flanks, and/or on the front and/or sides of neck, and/or the deepest part of the chest and/or as an overall thin or brittle coat. A minor indication of the problem is dogs that are fully coated but only have real curls on their necks and backs. The hair loss is very distinctly bilateral (on both sides of the dog). There are varying manifestations of this syndrome, from appearing nearly normal to being almost completely bald. In some cases, hair grows back after shedding, but within months rather than weeks.

Diets and supplements do not take care of patterned baldness. You should inform your dog’s breeder  of any symmetrical bald spots appearing on your puppy so that they can take this information into account in their breeding program. Unaffected dogs can produce affected puppies, implying a recessive gene or genes, but the exact mode of inheritance is unclear. Very few veterinarians know about this problem in Curly Coats.

Bloat, Torsion, Gastric dilatation-volvulus (GDV) all refer to the same life-threatening condition of large breed dogs. Treatment is complicated, expensive, and not always successful. There are thoughts that the type of food used, or the size of meals can contribute to a dog getting the condition. There is also quite a wide body of evidence put forward for bloat to have some hereditary basis.
Hip Dysplasia
Hip Dysplasia is an ongoing problems for all the retriever breeds as well as many other breeds of similar or larger size. It is a malformation of the ball and socket joint in the hip, with varying degrees of resulting impairment. Diagnosis is definitive only through proper x-ray analysis.  If you are looking at a puppy, ask if both parents have a hip score, and ask to see the certificates. The current average hip score for this breed is 10.99.

Canine Epilepsy is a chronic condition characterized by recurrent seizures.  Although seizures are always abnormal events, not all seizures in dogs are caused by canine epilepsy. Canine Epilepsy is a disorder of the brain where abnormal electrical activity triggers further uncoordinated nerve transmission.  This uncoordinated and haphazard nerve tissue activity scrambles messages to the muscles of your dog’s body and the coordinated use of the muscles is then inhibited.  Because there are many causes of chronic recurrent seizures in dogs, canine epilepsy is not a specific disease or even a single syndrome, but rather a diverse category of disorders. Behavioral changes include not recognizing the owner, viciousness, pacing, and running in circles.

Eye Problems – cataracts of various kinds, corneal dystrophy, suspected PRA, distichiasis, entropion, ectropion, PPM, retinal dysplasia occur in curly coats. None are particularly common but all should be asked about and guaranteed for.  It is recommended that dogs used for breeding are tested under the KC/BVA scheme.breeders should be able to supply current eye reports on the sire and dam.

Early in the disease, affected dogs are night blind, lacking the ability to adjust their vision to dim light; later their daytime vision also fails. As their vision deteriorates, affected dogs will adapt to their handicap as long as their environment remains constant, and they are not faced with situations requiring excellent vision. At the same time the pupils of their eyes become increasingly dilated, in a vain attempt to gather more light, causing a noticeable “shine” to their eyes; and the lens of their eyes may become cloudy, or opaque, resulting in a cataract.

Elbow disease is the preferred term to be used when talking about elbow problems in growing dogs. Unfortunately “elbow displaysia” was the name given to the condition of ununited anconeal process and this term is closely linked in this way in the minds of most veterinarians and some dog breeders. Elbow disease is a general term to denote joint problems in growing dogs.

Elbow disease has received increasing publicity in recent years due to the high prevalence of foreleg lameness localised to the elbow joint and the realisation that elbow disease has a hereditary basis.