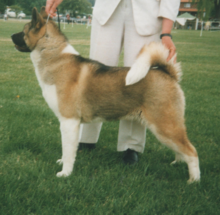 The Akita is a large spitz breed of dog originating from the mountainous northern regions of Japan.

Both forms of Akita are probably best known worldwide from the true story of Hachikō, a loyal Akita dog who lived in Japan before World War II. The Akita is a strong, independent and dominant breed, commonly aloof with strangers but affectionate with family members. They are known to compete in many dog competition sports, yet some are known to be intolerant of other dogs and require a knowledgeable and firm handler.As a breed, Akitas are generally hardy, but they have been known to suffer from various genetic conditions and be sensitive to certain drugs.

The Akita is docile, intelligent, courageous and fearless. Careful and very affectionate with its family. Sometimes spontaneous, it needs a firm, confident, consistent pack leader. Without it, the dog will be very willful and can become very aggressive to other dogs and animals. It needs firm training as a puppy.  If the dog is allowed to believe he is the leader over the humans he may become very food-possessive as he tells the humans to wait their turn. He eats first. Considered a first-class guard dog in Japan, Japanese mothers would often leave their children in the family Akita’s care. They are extremely loyal and thrive on firm leadership.

They should definitely be supervised with other household pets and children. Although the breed may tolerate and be good with children from his own family, if you do not teach this dog he is below all humans in the pack order he may not accept other children and if teased, Akitas may bite. Children must be taught to display leadership qualities and at the same time respect the dog. With the right type of owner, the proper amount of daily mental and physical exercise and firm training, they can make a fine pet, but only in the correct hands. Obedience training requires patience, as these dogs tend to get bored quickly. The Akita needs to be with its family. It vocalizes with many interesting sounds, but it is not an excessive barker.

As a northern breed (generically, Spitz), the appearance of the Akita reflects cold weather adaptations essential to their original function. The Akita is a substantial breed for its height with heavy bones. Characteristic physical traits of the breed include a large, bear-like head with erect, triangular ears set at a slight angle following the arch of the neck. The eyes are small, dark, deeply set and triangular in shape. Akitas have thick double coats, and tight, well knuckled cat-like feet. Their tails are carried over the top of the back in a graceful sweep down the loin, into a gentle single curl, or a double curl.

There are two coat types in the Akita, the standard coat length and the long coat. The long coat is considered a fault in the show ring, however, they still make good pets.The long coat, also known as ‘Moku’ is the result of a recessive gene and may be seen if both sire and dam of the dog are carriers. Moku have longer (about 3–4 inches in length) and softer coatsand are known to have sweeter temperaments.It is believed that this gene comes from the now extinct Karafuto-Ken a sled dog of  Russia origin.

Japanese history, both verbal and written, describe the ancestors of the Akita, the Matagi dog also referred to as the hunting dog, Bear hunting dog, Deer hunting dog  as one of the oldest of the native dogs. Today’s Akita developed primarily from dogs in the northernmost region of the island of Honshū in the Akita prefecture, thus providing the breed’s name. The Matagi’s quarry included wild boar, Sika deer, and Asian black bear. This swift, agile, unswervingly tenacious precursor dog tracked large game, holding it at bay until hunters arrived to make the kill. The breed is also influenced by crosses with larger breeds from Asia and Europe, including English Mastiffs, Great Danesand the Tosa Inu, in the desire to develop a fighting dog for the burgeoning dog fighting industry in Japan in the early 20th century. During World War II the Akita was also crossed with German Shepherd Dogs in an attempt to save them from the war time government order for all non-military dogs to be culled.The ancestors of the Akita were originally a variety of the Akita inu, a form that was not desired in Japan due to the markings, and which is not eligible for show competition.

Three events focused positive attention on the breed in the early 1900s and brought the breed to the attention of the Western world.

First was the story of Hachikō, one of the most revered Akitas of all time. He was born in 1923 and owned by Professor Hidesaburō Ueno of Tokyo.Professor Ueno lived near the Shibuya Train Station in a suburb of the city and commuted to work every day on the train. Hachikō accompanied his master to and from the station each day.On May 25, 1925, when the dog was 18 months old, he waited for his master’s arrival on the four o’clock train. But he waited in vain; Professor Ueno had suffered a fatal stroke at work. Hachikō continued to wait for his master’s return. He travelled to and from the station each day for the next nine years. He allowed the professor’s relatives to care for him, but he never gave up the vigil at the station for his master. His vigil became world renowned when, in 1934,shortly before his death, a bronze statue was erected at the Shibuya train station in his honor.Each year on April 8 since 1936, Hachikō’s devotion has been honored with a solemn ceremony of remembrance at Tokyo’s Shibuya railroad station. Eventually, Hachikō’s legendary faithfulness became a national symbol of loyalty, particularly to the person and institution of the Emperor.

The second major event was in 1931, when the Akita was officially declared a Japanese Natural Monument. In 1967, commemorating the 50th anniversary of the founding of the Akita Dog Preservation Society, the Akita Dog Museum was built to house information, documents and photos.

The third positive event was the arrival of Helen Keller in Japan in 1937. She expressed a keen interest in the breed and was presented with the first two Akitas to enter the US. The first dog, presented to her by Mr. Ogasawara and named Kamikaze-go, died at five months of age from Distemper, one month after her return to the States. A second Akita was arranged to be sent to Miss Keller, he was Kamikaze’s litter brother, Kenzan-go.Kenzan-go died in the mid-1940s.

By 1939 a breed standard had been established and dog shows had been held, but such activities stopped after World War II began. Keller wrote in the Akita Journal:

Just as this breed was stabilizing in its native land, World War II pushed the Akita to the brink of extinction. Early in the war the dogs suffered from lack of nutritious food. Then many were killed to be eaten by the starving populace, and their pelts were used as clothing. Finally, the government ordered all remaining dogs to be killed on sight to prevent the spread of disease. The only way concerned owners could save their beloved Akitas was to turn them loose in remote mountain areas, where they bred back with their ancestor dogs, the Matagi,or conceal them from authorities by means of crossing with German Shepherd dogs, and naming them in the style of German Shepherd dogs of the time.

During the occupation years following the war, the breed began to thrive again and for the first time, Akitas were bred for a standardized appearance. Akita fanciers in Japan began gathering and exhibiting the remaining Akitas and producing litters in order to restore the breed to sustainable numbers and to accentuate the original characteristics of the breed muddied by crosses to other breeds.U.S. servicemen fell in love with the Akita and imported many with them upon their return.
The Akita inu and the Western Akita began to diverge in type during the Post–World War II era. It was during this time, that US servicemen serving as part of the occupation force in Japan first came into contact with the Akita, the breed so impressed them that many soldiers chose to bring an Akita back home with them upon completion of their tour. American soldiers were typically more impressed with the larger more bear-like fighting Akita or German Shepherd type than they were with the smaller framed and fox-like Akita-Inu; the types of dogs they brought back with them to the US reflected this preference.

The Akita was first introduced to the UK in 1937, he was a Canadian import, owned by a Mrs. Jenson, however the breed was not widely known until the early 1980s.

There are two breed specific conditions mentioned in veterinary literature:

The health conditions mentioned below are by no means only specific to the Akita, but also to many other breeds including mix or cross breeds.All however, have been seen enough in the Akita to be listed as conditions known to occur in the breed.

There are many autoimmune diseases that are known to sometimes occur in the Akita. These include, but are not limited to:

In addition to these there are also Immune-mediated endocrine diseases with a genetic factor, such as:

Other conditions known to have occurred in the Akita include: