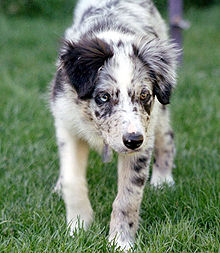 The Border Collie is a herding dog breed developed in the Anglo-Scottish border region for herding livestock, especially sheep. It is the most widespread of the collie breeds.

Typically extremely energetic, acrobatic, and athletic, they frequently compete with great success in dog sports, in addition to their success in sheepdog trials, and are often cited as the most intelligent of all dogs. In January 2011, a Border Collie named Chaser was reported to have learned 1,022 words ( see separate article).

The border collie is one of the hardest working dogs thriving on praise. Border Collies are represented among the leaders in competitive levels in various sports, excelling in agility skills, obedience, sheepdog trials and Frisbee (TM).

The Border Collie is highly energetic with great stamina. Provided they gets sufficient activity to keep them occupied and ample exercise, the Border Collie will get along quite happily with other dogs, and children, however they may be aggressive with other dogs of the same sex if you are not showing 100% leadership with them. They should not be trusted with small non-canine pets, however there are plenty of Border Collies that live and get along with family cats. This breed can be sensitive and should be very well socialized as a puppy to prevent shyness. To be truly happy, they need a lot of consistent leadership, extensive daily exercise, and a job to occupy their minds. Border Collies will often challenge their owners authority when they are adolescents. Dominance levels vary greatly even within the same litter.

They can be highly reactive and sound sensitive, making them a poor choice for families with young children. They are perfectionists with a permanent will to please. This breed lives for serving you day in and day out. They are not ideal pets for people who have no plans to spend a lot of time with them. They are are too intelligent to lie around the house all day with nothing to do. If you are not willing to put many hours a day into keeping these dogs well exercised in both mind and body, than it is recommended you do not adopt a Border Collie. There are other breeds whom are similar yet not as demanding. When not challenged daily they can and will become destructive. They cannot be left alone for too long with nothing to do if they have not been exercised to the point where they are both mentally and physically tired. A bored Border Collie will not make a good pet, as they can become neurotic and may start using their escape artist talents, among other behaviour problems. They have strong herding instincts and may try to herd children and strangers and must be told this is not acceptable.

The Border Collie is a medium sized, energetic working dog. The body is slightly longer than it is tall. The relatively flat skull is moderate in width. The skull and muzzle are about the same length, with a moderate stop. The strong teeth meet in a scissors bite. The oval eyes are set well apart and brown in colour, except in merles where one or more eyes may be blue. The medium sized ears are set well apart, either carried erect or semi erect. The front legs are straight when viewed from the front but slightly sloping when viewed from the side. The medium sized tail is set low reaching at least to the hock, raising somewhat when the dog is excited. Dewclaws are sometimes removed. The double coat is weather resistant, dense and close-fitting. There are two coat varieties: a short, sleek coat (about 1 inch (2.5 cm.) long) and a coarse, rough coat (about 3 inches (7.6 cm.) long).

The longer haired variety should have a mane and tail brush. The hair on the face, ears and front legs is always short and sleek. Since Border Collies are bred for working ability and intelligence rather than for physical beauty, conformation varies widely.

Compared to the long period of time shepherds use dogs for working at the farm, the Border Collie as we know it is quite young.

There are several publications from the nineteenth century that describe ‘Collie’ or ‘Colley’ dogs. Illustrations dating from this time show a variation in type. Sometimes the dogs look more like the current rough collie, in other cases they look like the Border Collie, and sometimes it is impossible to recognise a current breed.At the end of the nineteenth century, you can find a type of ‘Colley’ that resembles the current Border Collie. With the birth of the legendary Old Hemp in 1893 and Old Kep in 1901, the current type has emerged.

There is a lot of dispute about the origin of the name Border Collie. Some authorities claim the origin of the word Collie lies in the word ‘Coal’; ‘colley’ or ‘coly’ relating to the colour black. Others think Collie is a Gaelic word with the meaning ‘useful’. Another theory takes it yet one step further and relates the word ‘collie’ to the German ‘Kuli’. ‘Kuli’ is pronounced the same way as the English ‘coollie’ which means ‘worker’. The fact that there is indeed a breed called ‘Alt Deutscher Kuli’ which works with sheep, makes the story complete. This word ‘Kuli’ is supposedly coming from ‘collaborare’ (to collaborate) in Latin. At the time of the Roman occupation, the Gaelic provinces bordered at the Rhine in Germany.

The word ‘Border’ can be attributed to James Reid—secretary of the International Sheepdog Society (ISDS) from 1915 till 1948. In 1918 he described the winner of the Supreme Championship as Border Collie.

Hip dysplasia, Collie eye anomaly (CEA), and epilepsy are considered the primary genetic diseases of concern in the breed at this time. CEA is a congenital, inherited eye disease involving the retina, choroid, and sclera that sometimes affects Border Collies. In Border Collies, it is generally a mild disease and rarely significantly impairs vision. There is now a DNA test available for CEAand, through its use, breeders can ensure that they will not produce affected pups. Collies can also suffer from hip and elbow problems, scanning of breeding stock is advisable.

Neuronal ceroid lipofuscinosis (NCL) is a rare but serious disease that is limited to show Border Collies. NCL results in severe neurological impairment and early death; afflicted dogs rarely survive beyond two years of age. There is no treatment or cure, but a DNA test is now available to detect carriers as well as affected dogs.

Trapped Neutrophil Syndrome (TNS) is a hereditary disease in which the bone marrow produces neutrophils (white cells) but is unable to effectively release them into the bloodstream. Affected puppies have an impaired immune system and will eventually die from infections they cannot fight. The mutation responsible for TNS has been found in Border Collies in English working dogs, in show dogs that had originated in Australia and New Zealand, and in unrelated Australian working dogs. This indicates that the gene is widespread and probably as old as the breed itself. There is no cure, but a DNA test is now available to detect carriers as well as affected dogs.

Elbow dysplasia or osteochondritis, deafness, and hypothyroidism may also occur in the breed. Dogs homozygous for the merle gene are more likely to have eye and/or hearing problems.