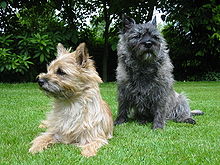 The Cairn Terrier is an alert, animated, hardy, little dog. They are adventurous, intelligent, strong, loyal, and tough–not a delicate lapdog but they usually enjoy playing with children. The Cairn is believed to be one of the oldest breeds of terrier north of the border. It is also rumoured to be an ancestor to all Scottish terriers, although there are no reliable records.

Although the breed had existed long before, the name Cairn Terrier was a compromise suggestion after the breed was originally brought to official shows in the United Kingdom in 1909 under the name Short-haired Skye terriers. This name was not acceptable to The Kennel Club due to opposition from Skye Terrier breeders, and the name Cairn Terrier was suggested in 1910 as an alternative. They are usually left-pawed,which has been shown in dogs to correlate to superior performance in tasks related to scent. Cairn Terriers are ratters. In Scotland they would search the cairns (man-made pile of stones) for rats and other rodents. Thus if one is kept as a household pet it will do the job of a cat, specifically catching and killing mice, rabbits, and squirrels.

Cairns are independent characters, but will listen if they see the human is stronger minded than themselves. Meek and/or passive owners will find the dog to be willful. This breed can be taught to do tricks. A fearless, bold vermin hunter, Cairns like to dig, so proud gardeners may want to choose a different breed. Although small they are active inquisitive dogs and with enough mental and physical exercise along with consistent leadership they will be calm and easy-going pets.  They need firm, but not harsh, training and discipline. Without the proper leadership, the Cairn can become destructive and/or bark excessively. If they spot a rabbit or other small animal they may take off chasing it, and can find it difficult, if not impossible to control their instincts with cats, and other small furry pets. Do not allow this little dog to develop Small Dog Syndrome, human induced behaviours, where they believe they are pack leader to humans. Cairns with this syndrome will develop all types of varying degrees of behaviour problems, including, but not limited to separation anxiety, stubbornness, snapping, growling and guarding. Although small in size at nine to ten inches at the shoulder with weight ranging from thirteen to fourteen pounds, the Cairn is a big dog trapped in a little dog’s body. There have been cases of Cairns taking on much larger and fiercer dogs, only to come out on the losing end, because they do not know when to back down.

The Cairn Terrier has a harsh, weather-resistant outer coat that can be cream, wheaten, red, sandy, grey, or brindled in any of these colours. Pure black, black and tan, and white are not permitted by many kennel clubs. A notable characteristic of Cairns is that brindled Cairns frequently change colour throughout their lifetime. It is not uncommon for a brindled Cairn to become progressively more black or silver as it ages. The Cairn is double-coated, with a soft, dense undercoat and a harsh outer coat. A well-groomed Cairn has a rough-and-ready appearance, free of artifice or exaggeration. Cairn Terriers are hypoallergenic and shed very little but should always be hand stripped. Using scissors or shears can ruin the dog’s rugged outer coat after one grooming. Hand stripping involves pulling the old dead hair out by the roots. This does not harm the dog in any way. Removing the dead hair in this manner allows new growth to come in. This new growth helps protect the dog from water and dirt. Extra attention should be given to the grooming of the Cairn Terrier in order to help prevent bothersome skin conditions as they get older.

These dogs are generally healthy and live on average about 12 to 17 years However like many breeds there are several health concerned associated with the breed. Some of these diseases are hereditary while others occur as a result of non-specific factors (i.e. infections, toxins, injuries, or advanced age).

Some of the more common hereditary health problems found in the Cairn are:  Cataracts, Ocular Melanosis, Progressive retinal atrophy, Corneal dystrophy, Krabbe disease (Globoid cell leukodystrophy), Hip dysplasia, Legg-Calvé-Perthes syndrome, Craniomandibular osteopathy (Lion Jaw), Von Willebrand disease, Hypothyroidism, Portosystemic shunt, Luxating patella, Entropion, and Soft Tissue Sarcoma (STS). However cairns are generally hardy dogs. Most of these conditions are also found in other terriers such as the West Highland White and Scottish terrier. Skeletal problems such as hip dysplasia and luxating patellas are found in a great number of dogs, of all shapes and sizes.

Responsible breeders should know about the health problems of their breed, and be able to discuss the implications for pet owners. Breeding animals should be screened for potential problems if a current test is available, affected individuals should not be bred from. When selecting a breeder, recommendation from other cairn owners is often the best starting point.