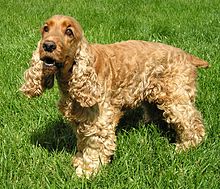 The English Cocker Spaniel, known as the ‘Merry Cocker’ due to its cheerful temperament and constantly wagging tail is an intelligent, sturdy and robust dog. Lively, perky and lovable, pleasant, gentle, playful and affectionate, they are excellent with children and usually get on with other animals. They are average barkers, and are willing and happy to listen to their owners. Generally an outgoing breed, taking to strangers easily, but some individuals can be reserved without enough socialization.

Like many other working breeds there are two types, field lines and show lines. Field types are bred for hunting and field trial work. The bench type are bred for conformation shows. Both types are energetic and need daily exercise, but field lines have a higher energy level, and need even more exercise. The dominancy level in this breed varies widely even within the same litter. They are sensitive to the tone of one’s voice and will not listen if they sense they are stronger minded than their owner, however they will also not respond well to harsh discipline. If you are not the type of person who can display a natural air of calm, but firm authority, then be sure to choose a pup who is more submissive. The temperament of both show and field lines vary widely, depending upon how the owners treat the dog and how much and what type of exercise they provide.

Those individuals who are given consistent structure, calm, stern authority, with rules made clear and daily walks where the dog is made to heel beside or behind the human are the happiest dogs and make the best companions. Those individuals, who are not taken for daily walks, allowed to believe they are in charge rather than their owners or who are treated like little humans with four legs end up with a varying degree of behaviour and or temperament issues.

Like many gun dog breeds, house training can be a problem, with many young dogs having submissive urination issues when greeting family members, but this usually decreases with time.

Spaniels were first mentioned in the 14th century by Gaston III of Foix-Béarn in his work the Livre de Chasse. The “cocking” or “cocker spaniel” was first used to refer to a type of field or land spaniel in the 19th century. Prior to 1901, Cocker Spaniels were only separated from Field Spaniels and Springer Spaniels, Norfolk spaniels, sussex spaniels and clumber spaniels by weight and colour. The Welsh or Devonshire were considered cockers until 1903 when they were recognized by The Kennel Club as the Welsh Springer Spaniel.

They were bred as gun dogs; to use their sense of smell to cover low areas near the handler in order to flush birds into the air to be shot, and to use their eyes and nose to locate the bird once downed, and then to retrieve the bird with a soft mouth. The name ‘cocker’ comes from the ability to flush a particular game bird the ‘woodcock’. Cocker spaniels come in a variety of colours including black, liver, red and golden in solids, and also black and tan, and liver and tan, as well as a variety of colour mixtures of those solid colours including roans, roan and tans, tricolours and those solid colours with additional white markings.

Life expectancy is about 12-15 years.

In a survey conducted by the Kennel Club (UK),  the most common cause of death for both American and English cocker spaniels was cancer, while old age was the second most common cause. Both breeds are susceptible to several health problems. Common issues include ear infections, and a variety of eye problems.

Cocker spaniels and other dogs that have long, pendulous ears are more predisposed to ear problems than some other breeds. The fold of the ear can prevent air from entering, and it also creates a warm, moist environment where organisms can grow. Otitis externa is an inflammation of the ear canal which can be caused by a variety of factors including parasites, microorganisms, foreign bodies, tumours, and underlying dermatological disease Some conditions can increase the chance of ear infections, including living in a humid environment and frequent swimming or bathing without adequate drying of the ear afterwards.

Progressive retinal atrophy (PRA) is a term given to several diseases which affect a dog’s eyesight and can lead to blindness. Cockers are susceptible to a specific type of PRA called Progressive rod-cone degeneration (PRCD), symptoms include night blindness leading to total blindness between the ages of three and five.PRCD is the most widespread hereditary retinal disease which may lead to blindness in dogs.

Another leading cause of blindness is Canine glaucoma. This is an increase in the pressure of the fluid in the eye which, if left untreated, can cause visual impairment and eventual loss of sight. The condition can be inherited (Primary glaucoma) or a secondary condition to a variety of other eye issues including tumours or lens luxation. Both breeds are affected by juvenile cataracts which can occur at up to four years of age. Symptoms can include discoloring of the pupil, and treatment may include surgery to remove the cataract.

Rage Syndrome, also known as Sudden Onset Aggression, is a serious but rare behavioural problem that has been reported most commonly in the English Cocker Spaniel but also in a variety of other dog breeds. It is often misdiagnosed as it can be confused with other forms of aggression. It is thought to be genetic in origin and is inheritable.

Affected dogs suddenly act aggressively to anyone nearby, but minutes later will be calm and normal. The animal does not seem to remember or realise what has taken place and may act immediately friendly to the person(s) that it previously attacked. Attacks such as these have not stopped with training because it is a problem that the dog seemingly cannot consciously control. The attack will happen without apparent cause.

Dr. Roger A. Mugford, to whom the term is attributed, identified that the problem starts on average at around seven and a half months old in English Springer Spaniels. However some of his research subjects showed signs at as early as three months and as late as two years.

It has been reported that rage syndrome is more common in certain colours of Cocker spaniels, specifically red, golden or black and specific lines tend to have a higher occurrence. All solid coloured cockers tend to be at higher risk than their multi-coloured dogs, with darker colours being most affected. It is most often associated with the show lines of the breed although cases have been found in the working lines as well. The colour of the dog may not actually be genetically related, but is more likely to reflect certain bloodlines. Cocker spaniel breeders do not commonly breed solid colours to parti-colours and so the two colour phases tend to be mostly distinct.

So despite several  studies, there are still several  theories on what Rage Syndrome is and  what it is caused by, as well as treatment options. These theories include: a form of epilepsy, a canine form of schizophrenia; low serotonin levels in the brain and thyroid dysfunction, although most people agree there is some inheritable component. Some also believe that many dogs exhibiting ‘Rage Syndrome’ simply have a form of dominance-related aggression & is not a separate condition at all. Although it seems prudent not to breed from dogs exhibiting the syndrome or those who have produced ‘rage’ puppies in the past.

Like any prospective buyer of a pedigree dog, it is advised to go to a breeder who is knowledgeable about their breed, both the good points and the bad. Recommendation from other buyers is obviously one of the best ways to chose a breeder, and its well worth waiting for the right puppy, rather than getting one on impulse.