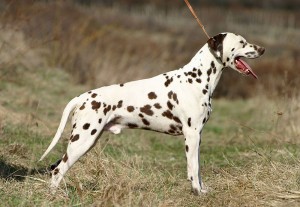 The Dalmatian (Croatian: Dalmatinac, Dalmatiner) is a breed whose roots are often said to trace back to Dalmatia (a region of Croatia).It is also known as the Carriage Dog, the Spotted Coach Dog, the Firehouse Dog and even the ‘Plum Pudding Dog’.

The Dalmatian is noted for its unique black- or brown-spotted coat and was mainly used as a carriage dog in its early days. Today, this dog remains a well-loved family pet, and many dog enthusiasts enter their pets into the competitions of many kennel clubs.

Dalmatians were bred to run under or alongside horse-drawn carriages and therefore have a vast amount of stamina and energy. They do not like to sit around all day with nothing to do. They are playful, happy, easy going and very dedicated. The Dalmatian needs a lot of leadership along with human companionship in order to be happy. They will not do well left out in the garden all day and have been known to dig crater-size holes when bored. The Dalmatian enjoys playing with children, but if they do not receive enough mental and physical exercise they may become high-strung, and too excitable for a small child, they can become timid, and even exhibit fear aggression without enough socialization, they may become aggressive with strange dogs. They are quite intelligent, but can be willful if they sense their owners are in the slightest bit meek or passive, and they generally does well with firm, consistent training and lots of exercise.

The Dalmatian is trainable to a high degree of obedience. They can be trained for defence and are good watchdogs. Unfortunately due to falling in love with the appearance, and without taking the breeds need into consideration, up to half of the people who adopt a Dalmatian puppy do not keep them past the first year. Young Dalmatians are very energetic, and need a tremendous amount of leadership and exercise, but they do calm down after a few years. People who keep them long enough to get past their active stage tend to be very pleased. If you are thinking about adopting a Dalmatian puppy be sure you have the time, are authority driven and have the energy for them.

The skull is about as wide as it is long, and flat on the top. The muzzle is about the same length as the top of the skull. The stop is moderate but well defined. The nose can be black, brown (liver), blue or a dark gray that looks like black. The teeth meet in a scissors bite. The medium-sized round eyes are brown, blue or a combination of both. The ears are set high, hanging down, gradually tapering to a rounded tip. The chest is deep. The base of the tail is level with the top line and tapers to the tip. The feet are round with arched toes. Toenails are white and/or black in black-spotted dogs and brown and/or white in liver-spotted dogs. The short coat has fine dense hairs. The symmetrical coat is predominantly white with clearly defined round spots.

Dalmatian puppies are born with plain white coats and their first spots usually appear within three weeks after birth. After about a month, they have most of their spots, although they continue to develop throughout life at a much slower rate. Spots usually range in size from 30 to 60 mm, and are most commonly black or brown (liver) on a white background. Other more rare colours found in the breed are not accepted in the show ring but spots in blue, brindle, mosaic, tri-colored (with tan spotting on the eyebrows, cheeks, legs, and chest), and orange or lemon (dark to pale yellow), as well as pure white examples. Patches of colour can appear anywhere on the body, mostly on the head or ears, and usually consist of a solid colour.

Not all of these colours are accepted into the show ring, but they do occur in the breed. The more defined and well distributed the markings are, the more valued the dog is to the show ring. Puppies are born completely white and the spots develop later.

There is some disagreement about the early origins of this breed due to spotted dogs being known throughout history in Africa, Europe and Asia. Traces of spotted dogs are found in Egyptian bas-reliefs and Hellenic friezes, so it certainly is an ancient breed.

It is now largely acknowledged that it is a Croatian breed. Efforts to have it recognized as a Croatian breed had been rejected, up until 1993, when the FCI did finally recognize the Croatian roots of the Dalmatian dog, although they continue to deny Croatia standard patronage rights over the breed. In the Middle Ages it was used as a hound. The breed became popular as a carriage dog in the 1800 and was developed mainly in the UK. They trotted beside and among the horses and carriages, very reliably following their masters, guarding the carriages and horses while the master was occupied elsewhere. Very hardy with great stamina, it was able to easily keep up whether its master was on foot, on horseback, or in the carriage. The versatile Dalmatian has seen many uses, such as a mascot for firemen, war sentinel, draft dog, circus performer, vermin hunter, fire-apparatus follower, bird dog, trail hound, retriever, shepherd and as a guard dog.

Like other breeds, Dalmatians display a propensity towards certain health problems, although hip dysplasia is not nearly as common in this breed as in others of a similar size. Breed health surveys in the US and UK shows an average lifespan of 9.9 and 11.55 years, respectively. In their late teens, both males and females may suffer bone spurs and arthritic conditions. Autoimmune thyroiditis is a relatively common condition for the breed, affecting 10.4% of dogs.

Deafness: A genetic predisposition for deafness is a serious health problem for Dalmatians; one survey concluded that only about 70% have normal hearing.Deafness was not recognized by early breeders, so the breed was thought to be unintelligent. Even after recognizing the problem as a genetic fault, breeders did not understand the dogs’ nature, and deafness in Dalmatians is still a problem although reputable breeder are working hard on the problem by hearing testing all breeding stock.

Researchers now know deafness in albino and piebald animals is caused by the absence of mature melanocytes (pigment cells) in the inner ear. This may affect one or both ears. The condition is also common in other canine breeds that share a genetic propensity for light pigmentation. This includes, but is not limited to Bull Terriers, Poodles, Boxers, Border Collies and Great Danes.

The Dalmatian Club of America states that deaf pups should always be euthanized and never be sold or placed to pet homes, although with a great deal of dedication, they can make good companions for experienced, informed owners.

Blue-eyed Dalmatians have a greater incidence of deafness than brown-eyed Dalmatians, although an absolute link between the two characteristics has yet to be conclusively proven. Though blue-eyed Dalmatians are not necessarily deaf, many kennel clubs consider blue eyes to be a fault or even a disqualification, and discourage breeding form such individuals.

Hyperuricemia: Dalmatians, like humans, can suffer from hyperuricemia. Dalmatians’ livers have trouble breaking down uric acid, which can build up in the blood serum (hyperuricemia) causing gout. Uric acid can also be excreted in high concentration into the urine, causing kidney and bladder stones. These conditions are most likely to occur in middle-aged males. Males over 10 are prone to kidney stones and should have their calcium intake reduced or be given preventive medication. To reduce the risk of gout and stones, owners should carefully limit the intake of purines by avoiding giving their dogs food containing organ meats, or animal by products. Hyperuricemia in Dalmatians responds to treatment.

Hyperuricemia in Dalmatians (as in all breeds) is inherited, but unlike other breeds, the “normal” gene for uricase is not present in the breed’s gene pool. Therefore, there is no possibility of eliminating hyperuricemia among pure-bred Dalmatians. The only possible solution to this problem is to cross Dalmatians with other breeds to reintroduce the “normal” uricase gene. This led to the foundation of the Dalmatian-Pointer Backcross Project, which aims to reintroduce the normal uricase gene into the Dalmatian breed. The backcross used a single English Pointer; subsequent breedings have all been to purebred Dalmatians. By the fifth generation in 1981, they resembled purebreds so much, Dr. Schaible convinced the AKC to allow two of the hybrids to be registered as purebreds. Then AKC President William F. Stifel stated, “If there is a logical, scientific way to correct genetic health problems associated with certain breed traits and still preserve the integrity of the breed standard, it is incumbent upon the American Kennel Club to lead the way.”The Dalmatian Club of America’s (DCA) board of directors supported this decision, however it quickly became highly controversial among the club members. A vote by DCA members opposed the registration of the hybrids, causing the AKC to ban registration to any of the dog’s offspring.

In July 2011, the AKC finally agreed to allow registration of backcrossed Dalmatians.

In 2010, the UK Kennel Club registered a backcrossed Dalmatian called Ch. Fiacre’s First and Foremost, although several restrictions were imposed on the dog. Although the dog is at least 13 generations removed from the original Pointer cross, its F1 to F3 progeny will be marked on registration certificates with asterisks (which “indicate impure or unverified breeding”) no progeny will be eligible to be exported as pedigrees for the next five years, and all have to be health tested. UK Dalmatian breed clubs have objected to the decision by the Kennel Club.