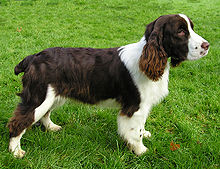 The English Springer Spaniel is a dog for all seasons, an endearing energetic companion for the owner who is willing to give it the time that it deserves. Highly thought of by the police as sniffer dogs, well known in the field trial world for their tireless enthusiasm, many a rough shooting man’s friend, a joy to behold when moving round the show ring in their own distinctive style, a wonderful family pet and a good companion for young and old alike. The Springer is a sociable breed that enjoys the company of children and handles the company of other pets well. If left alone for too long, they can become destructive and mischievous through boredom. They love the water, and tend to get wet whenever they have the chance.

This popular gun dog breed is traditionally used for flushing and retrieving game. It is an affectionate, excitable breed with an average lifespan of twelve to fourteen years.Descended from the Norfolk or Shropshire Spaniels of the mid-19th century, the breed has diverged into separate show and working lines. The breed suffers from average health complaints. The show-bred version of the breed has been linked to “rage syndrome“, although the disorder is very rare. It is closely related to the Welsh Springer Spaniel and very closely with the Cocker Spaniel; less than a century ago, springers and cockers would come from the same litter, the only distinguishing feature being size. They are used as sniffer dogs on a widespread basis. The term springer comes from the historic hunting role, where the dog would “spring” (flush) birds into the air.

Like many dogs in the ‘working’ category there are two distinctly different ‘types’ of Springer, those from working or ‘field lines and those from ‘show’ lines. A ‘field’bred dog would not be competitive in a modern dog show while a show dog would not have the speed or stamina to succeed in a field trial.Field-bred dogs tend to have shorter, coarser coats than show-bred dogs. The ears are less pendulous. Field-bred dogs are wiry and have more of a feral look than those bred for showing. The tail of the field-bred dog is docked by a few inches in comparison to the show dog. Field-bred dogs are selected for nose, hunting ability, and response to training rather than appearance.Show type dogs have longer fur and more pendant ears, dewlaps and dangling flews. They are generally more thickly boned and heavier than field-bred Springer. For the average family looking for a pet, a show type dog is probably a better option due to the extra exercise and stimulation needed by a ‘field’ type dog.

Field-bred Springers  tend to have shorter, coarser coats than the longer furred show-bred dogs. Coats are shed in summer and spring months, but also occasionally in the autumn. They come in in black and white, liver and white or tricolour. Tricolour dogs are less common with tan marking in addition to white and black or liver. The tan markings are found on eyebrows, cheeks, inside of ears and under the tail. Any other colour combinations are referred to as ‘non-standard’ but self back or liver puppies make equally good pets compared with their ‘standard’ coloured litter mates.

Some health problems that are more likely to occur in Springers, but in general they are a healthy robust breed. As with most spaniels and other floppy eared dogs, they are prone to ear infections. Treatment can including cleaning the ear canal weekly with a solution that will leave the ear in an acidic state to retard the growth of yeast and bacteria. Other health problems include autoimmune diseases, which include allergies and other sensitivities to the environment. They can also be susceptible to various eye problems including inward or outward curling eyelashes or even an additional row of eyelashes, all of which can require corrective surgery.

Other problems can include hip dysplasia, a malformation of the hip joints that leads to arthritis, and progressive retinal atrophy (PRA), which is a degeneration of the retina causing vision loss leading to blindness, both are inherited conditions.. Another problem can be elbow dysplasia. Retinal dysplasia (RD), which can cause blindness and Phosphofructokinase deficiency (PFK), which is genetic deficiency which impairs the ability of cells using carbohydrates for energy are two other hereditary conditions for which breeders can screen prior to breeding.

Springers, like most other gun dogs are quite food fixated and tend to gain weight easily, and owners need to be careful about their food consumption.

Before guns were invented spaniels were used to flush game for trained hawks to bring to the handler, retrieving at this point was not as important as the ability to flush game birds. The first ‘spaniel’ type dogs were documented in the 14th century. Up until 1801 Springers and Cockers were distinguished only by size, by 1850 two strains of larger spaniels known as the Norfolk and Shropshire spaniels were shown under the breed name ‘Norfolk spaniel’.

In January 1899, the Spaniel Club of England and the Sporting Spaniel Society held their trials together for the first time. Two years later, in 1902, a combination of the physical standard from the Spaniel Club of England and the ability standard from the Sporting Spaniel Society led to the English Springer Spaniel breed being officially recognised by the Kennel club. In 1914, the first Field Champion was crowned, FTC Rivington Sam, whose dam was a registered cocker spaniel, Rivington Riband. Sam is considered one of the foundation sires for modern field lines.

An English Springer Spaniel is foremost an upland flushing dog. There are a number of skills that breeders train the dog to perform for their occupation.

One of the more unsual things Springers have been trained to search for is mobile phones. Murphy was  trained by HM Prison Service in HMP Norwich to search for mobile phones. He can tell the difference between the guards’ phones and illegal phones held by inmates. Other varied uses for the Springer can include sniffing out money, food products at airports, bumblebee nests, illegal immigrants, and blood.

Springers are used as drug dogs by agencies in various places including Sweden, Finland, Britain,Isle of Man, and Qatar.