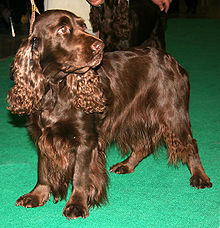 One of the handsomest and possibly most noble looking of all the Spaniel varieties, the Field Spaniel has had a chequered career since the breed evolved some 150 years ago.  Their fur is lighter than other spaniels and have no undercoat. Their coats come mostly in solid colours with some occasional markings on the chest. They can make good family dogs and are patient with children, but can require some sort of purpose, be it hunting or agility work in order to prevent them from becoming bored and destructive.

They are considered to be a rare breed, and are registered as a Vulnerable Native Breed by The Kennel Club, with only 55 puppies registered in 2011 and 51 in 2009, it has been in steady decline since 2000. Out of all the Spaniel breeds registered with The Kennel Club, the Field Spaniel has the lowest numbered registered year on year, with only the Sussex Spaniel coming a close second with 60 registrations in 2009. This is compared to the English Springer Spaniel with 12,700 and the English Cocker Spaniel with 22,211 registrations in 2009 alone.

At several points over the years the breed has sunk very low in numbers, in this century three revivals have taken place, the last as late as the 1960s. Numbers have increased considerably in the past ten years, and whereas at one time a Field Spaniel was rarely to be seen at shows, now many open shows put on classes for the breed as well as the majority of championship shows and group shows. As they have become better known, so has the popularity of the Field Spaniel increased, but many of those enquiring for one of the breed to own as a pet and companion have never seen one outside the pages of a book, and so have no idea of the character of the breed or what is involved in the keeping and training of a Field.

The Field Spaniel is a true country man, active tireless, inquisitive, apt to be noisy and, if not kept fully employed, destructive. He is not a dog for a city-dweller, or for those out at work all day who mean to leave him shut indoors alone for hours on end. Be sure he will protest long and loudly and annoy the neighbours, or vent his frustration by ripping the chair seats, chewing slippers, or removing wallpaper.

This is a loving sensitive breed, who likes to be with people and to take part in all that is going on. Nearly all Fields are avid travellers, loving the car and often quite content just to sit in one even if not going anywhere. They are not naturally obedient nor are they quick learners, but have to be taught firmly but gently from an early age what they may do and not do. Do not imagine that because your Field obeys you one day, he will do so the next. A Field really needs to know his lessons well before he can be entirely trusted to carry out your bidding and even then, such is his sense of fun and desire to make everyone laugh, he will forget all he has been taught and do something silly.

This is one of the larger of the Spaniel breeds, with a weight scale up to 40-55 pounds, and they are great feeders, especially the growing puppy who needs a great deal of the correct type and quality of food at regular hours if he is to grow well.

They are hardy dogs, at their best when living a natural outdoor life with plenty of exercise and fresh air. Owing to their normally good coats, Field Spaniels are easy to keep clean and smart, the removal of surplus hair under the ears, and on feet and hocks being all that is required for most specimens, while a daily grooming will keep his jacket shining and healthy.

The Field Spaniel was originally developed around 150 years ago for the show ring by competitors who were attempting to develop an all black Spaniel.  Some of the breeding methods of those early developers were criticised; one of the first breeders of the Field Spaniel, Thomas Jacobs, said of the origin; “Much has been written and said on the purity of the breed; deprecating the means I have adopted to produce them as calculated to alter a presumed type, and frequent missiles have at me and my dogs from behind the hedge. But where is the pure bred black spaniel we hear so much about? Proof of the existence of the pure bred one (if there ever was one!) has not been forthcoming. Like most sporting dogs, they are the result of different crosses.”

They were unpopular with sportsmen as the dark colours of the breed did not show up in hunting conditions, and the elongated and short shape of the early breed was not very practical for moving easily through cover. The low slung variety of Field Spaniel were developed  from a variety of black Cocker Spaniels, the  Sussex Spaniel and the now extinct English Water Spaniel.

By 1909, the average weight of a Field Spaniel was 35–45 pounds (16–20 kg).Further mixing of the breed occurred with elements of the Basset Hound introduced. Various genetic health issues arose and action was taken in order to correct the problems within the breed. English Springer Spaniels were used to introduce healthier elements into the breed and resulted in the longer legged spaniel that we know today. Most of the modern breed can be traced to four dogs from the 1950’s.

There are a few ocular conditions to which the Field Spaniel has a predisposition. These include cataracts, retinal atrophy and retinal dysplasia.Hip dysplasia has appeared in British lines of Field Spaniels. In a health survey conducted by the Kennel Club (UK), the primary cause of death in Field Spaniels was cancer, with the second most frequent cause being old age. The median lifespan for the breed was found to be eleven years and eight months, which is five months higher than the median age for all dog breeds.