The Greyhound is a very old European breed, a sighthound which has been historically bred for coursing game and racing. Since the rise in large scale rescue of retired racing Greyhounds, it has seen a resurgence in popularity as a family pet.

Greyhounds are an intelligent and gentle and intelligent breed whose combination of long, powerful legs, deep chest, flexible spine, and slim build allows it to reach average race speeds in excess of 63 kilometres per hour (39 mph)).At maximum acceleration, from a standing start, a  greyhound can reach full speed within 30 metres or six strides. The only other animal that can accelerate faster over a short distance is the cheetah, which can reach speeds of 109 kilometres per hour (68 mph) over 3-4 strides from a similar standing start. 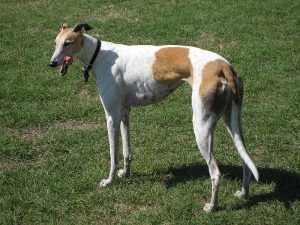 The Greyhound is brave and devoted. Intelligent, laid-back, charming and loving, its character is often undervalued because of its reserved behaviour toward strangers and even its master. Greyhounds are sensitive to tone voice and will not listen if they sense that they are stronger minded than their owner, however they do not respond well to harsh discipline. Owners need to be calm, yet possess an air of natural authority. Socialize well to prevent timidity.

As a rule, they are gentle and even-tempered—both racing lines and show lines. The Greyhound is not an aggressive dog, as some may believe due to muzzles worn during racing. Muzzles are worn to prevent injuries resulting from dogs nipping one another during or immediately after a race, when the ‘hare’ has disappeared out of sight and the dogs are no longer racing but still excited. The thin skin of the Greyhound can tear easily from a small nick from teeth, so even a minor skirmish can result in stitches and time out from racing.

Most Greyhounds have a definite prey drive. It is instinctive for these dogs to chase anything that moves quickly, so owners must always be aware that some will kill cats and other domestic animals if they run. However this is not the majority (only about 20% of ex-racers are too “keen” on chasing prey to ever be safe with small animals). About 10% are immediately okay due to low prey instinct, and the rest can be trained to leave cats and other small pets in the home alone., although outside it would be a different matter.

They seldom present difficulties with other dogs and are normally good with children, though they do not often like roughhouse play, and would not be a good choice for young children who are looking for a playmate.

Indoors, these dogs are calm and sociable to a point where they can even be considered lazy. They bond strongly with their own people, have tremendous stamina, and do not overly bark. Show lines tend to be of a different body style than racing lines, and are often heavier. Racing lines are bred for performance, but often a good by-product is that they are friendly, outgoing dogs that make wonderful pets when their racing days are over. Greyhounds are not particularly vigilant, and do not make good watch dogs.

Males are usually 71 to 76 centimetres (28 to 30 in) tall at the withers and weigh around 27 to 40 kilograms (60 to 88 lb). Females tend to be smaller with shoulder heights ranging from 68 to 71 centimetres (27 to 28 in) and weights from less than 27 to 34 kilograms (60 to 75 lb). Greyhounds have very short, easily maintained hair. There are approximately thirty recognized colour forms, of which variations of white, brindle, fawn, black, red and blue (gray) can appear uniquely or in combination.Greyhounds are dolichocephalic, that is they have a skull which is long in comparison to its breadth, and an elongated muzzle.

The key to the speed of a Greyhound can be found in its light but muscular build, large heart, and highest percentage of fast-twitch muscle of any breed,the double suspension gallop and the extreme flexibility of the spine. “Double suspension gallop” describes the fastest running gait of the Greyhound in which all four feet are free from the ground in two phases, contracted and extended, during each full stride.

The breed’s origin is romantically reputed to be connected to Ancient Egypt, where depictions of smooth-coated sighthound types have been found which are typical of Saluki (Persian greyhound) or Sloughi (tombs at Beni Hassan c. 2000 BCE). However, analyses of DNA reported in 2004 suggest that the Greyhound is not closely related to these other sighthounds, but is oddly a closer relative to herding dogs.

Historical literature suggests that the origin is with the ancient Celts from Eastern Europe or Eurasia. Greyhound-type dogs of small, medium, and large size, would appear to have been bred across Europe since that time. All modern, pure-bred pedigree Greyhounds are derived from the Greyhound stock recorded and registered, firstly in the private 18th century, then public 19th century studbooks, which ultimately were registered with coursing, racing, and kennel club authorities in Britain.

Historically, they were used primarily for hunting in the open where their keen eyesight is valuable. It is believed that they (or at least similarly named dogs) were introduced to Britain in the 5th and 6th century BCE from mainland Europe although the Picts of Scotland were believed to have had large hounds similar to that of the deerhound before the 6th century BCE.

In 1014, King Canute of England enacted the Forest Laws, which stated that only noblemen could own and hunt with greyhounds. However in the 1500s, Queen Elizabeth I abolished this law and later initiated the first formal rules of greyhound coursing. Thus, greyhound racing became known as the “Sport of Queens.”

In the early 1900s, huge crowds would gather to watch greyhound coursing. In the interest of safety, enclosed courses were introduced. These enclosed courses were much smaller than the open courses and speed over agility was of utmost importance, and racing began to take over from coursing as the primary use to which this breed was put.

The name “Greyhound” is generally believed to come from the Old English grighund. “Hund” is the antecedent of the modern “hound”, but the meaning of “grig” is undetermined, other than in reference to dogs in Old English and Old Norse. It has nothing to do with the colour. The Greyhound is the only dog mentioned by name in the Bible; many versions, including the King James version, name the Greyhound as one of the “four things stately” in the Proverbs.

In 1928, the very first winner of Best in Show at Crufts was Primeley Sceptre, a Greyhound owned by H. Whitley.

Greyhounds are typically a healthy and long-lived breed, and hereditary illness is rare. Some Greyhounds have been known to develop oesophageal achalasia, bloat (gastric torsion), and bone cancer. Because the Greyhound’s lean physique makes it ill-suited to sleeping on hard surfaces, owners of both racing and companion Greyhounds should provide provide soft bedding; without bedding, Greyhounds are prone to develop painful skin sores. The typical Greyhound lifespan is 10 to 13 years.

Due to the Greyhound’s unique physiology and anatomy, a veterinarian who understands the issues relevant to the breed is generally needed when the dogs need treatment, particularly when anaesthesia is required. Greyhounds cannot metabolize barbiturate-based anaesthesia as other breeds can because they have lower amounts of oxidative enzymes in their livers. Greyhounds demonstrate unusual blood chemistry, which can be misread by veterinarians not familiar with the breed; this can result in an incorrect diagnosis.

Greyhounds are very sensitive to insecticides, and many vets do not recommend the use of flea collars or flea spray on Greyhounds if it is a pyrethrin-based product. Products not harmful to cats, such as like Advantage, Frontline, Lufenuron, and are safe for use on Greyhounds and are very effective in controlling fleas and ticks.

Greyhounds do not have undercoats and thus are less likely to trigger dog allergies in humans although the lack of an undercoat, coupled with a general lack of body fat, also makes Greyhounds more susceptible to extreme temperatures (both hot and cold); because of this, they must be housed inside, and most owners prefer to use dog coats in adverse weather.