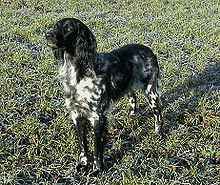 The Large Munsterlander is a tall multi-purpose gundog  from Munster in Germany,  first registered by the UK Kennel Club in 1971.

The breed is courageous, cheerful, intelligent and obedient, and makes a wonderful house companion dog and is very trainable. Munsterlanders are loyal and friendly dogs that are responsive to their humans. Although If the Munsterlander is lacking in leadership and or mental and physical exercise they can get destructive and bark when left alone in the house. They are not guard dogs and generally love everyone. The Munster does well in obedience, and is good with other animals and with children.

They like to retrieve, particularly from water and naturally like to carry things about in their mouths. They will be happiest when used as working dogs. Bred for training and ability to withstand the pressures involved, this dog will adapt to any terrain whether it be valleys, prairies, forest or water, and to every type of hunting. It is resistant to fatigue and to bad weather. Particularly appreciated for the sureness of its point and the precision with which it retrieves.

The breed has shown itself to be a dedicated enemy of birds of prey and they may try to attack small farm animals, however they can be trained to leave sheep and cattle alone. Although he will chase every small rodent and bird, he can’t be bothered to chase cars, joggers and bikes. When he spots a bird or rabbit he will usually freeze in his motion. His head will point towards the prey and his whole body shifts slightly forward; one of the front feet will often be off the ground. The rapid motion freeze will prevent the prey from being alarmed and shows the hunter where the prey is hiding. The position can be often seen in old pictures and paintings and is typical of pointers.

The Large Munsterlander possesses a well-balanced conformation suggestive of easy, steady movement and drive, an elegant gait. The breed’s head is sufficiently broad and slightly rounded giving an impression of stability, even dignity. Solid black with a white snip or star is allowed. The body is white with black patches, flecked and/or ticked. An all black coat is not desirable to breeders. Brown coats do occur, but are not common. Its broad, round-tipped ears hang close to the head. They should have a scissors bite. The eyes are dark and heavy lidded. The coat is long and dense, neither curly nor coarse. It has feathers on the ears, front and hind legs, and tail. Males usually have larger heads, longer hair on the chest and more feathering than females. When the dog stands, his extended hind feet should stand in a right angle to the ground. It has firm, strong feet with ample hair between the black-nailed toes. The tail is carried horizontally.

Although as a registered breed in its own right, the Large Munsterlander has only existed since 1922, the history of the Large Munsterlander goes back to the Middle Ages. The breed has evolved from the ancient longhaired hawking and retrieving dogs found across Europe, where they can be seen depicted in paintings from the 16th and 17th centuries. Up to the middle of the 19th century the breeding of hunting dogs in Germany was quite well regulated, then breeders decided that improvement was required.

In most areas in Germany, out-crosses with English Setters and Pointers were very popular, but by 1879 the German breeders decided to take control and establish proper breed standards. Up to this time, what are now known as Large Munsterlanders, were registered as German Longhaired Pointers, which included both black and brown variations. When the new breed standard was fixed for the German Longhaired Pointer, it only allowed for brown or brown and white dogs to be included. The reason for this was that the German breeders wanted to distance themselves from the “English” crosses and the colour black was supposed to have been introduced in this manner. This was also a forbidden colour in both German Shorthaired and Wirehaired Pointers. This argument was totally unsound, as blacks had always been present in German breeds.

This was especially true of the Large Munsterlander, which were mostly popular in Westphalia and Lower Saxony, where crosses with the “English” breeds were not usually, if at all practised.

The hunters who owned them keenly supported the breeding of the black and white Longhaired Pointers and in 1919, to ensure the continuation of the breed, decided to form their own society. A foundation list for the breed was compiled for the breed register, which was started in 1922.

From research and information collated by veterinary specialists, it is recommended that health screening is carried out [where there is a recognized test available] for diseases which appear regularly enough within a breed to cause concern. For the Large Munsterlander these are Hyperuricosuria, Hereditary Cataract in the eye, Hip Dysplasia and more recently Elbow Dysplasia.

Hyperuricosuria means elevated levels of uric acid in the urine. This trait predisposes dogs to form stones in their bladders or sometimes kidneys. These stones often must be removed surgically and can be difficult to treat. Hyperuricosuria is inherited as a simple autosomal recessive trait.

Hereditary Cataract [HC] was discovered in the Large Munsterlander in the UK, in the late 1970′s, in some of the pups from one litter of the early imports. The breeders of the time decided not to breed on from any of that litter, and commenced eye testing as many of the other Large Munsterlanders in the country as possible. When it appeared that no more affected dogs  were occurring there seemed to be no further need to screen for HC, and many  people tailed off their testing programme.

However in more recent years, further affected dogs came to light, and it is now recommended that as many Large Munsterlanders as possible are screened for HC, particularly those used for breeding. As there have been dogs which have tested unaffected as young adults then on retesting at a later age have been found to be affected, it would appear that the type of cataract seen in the Large Munsterlander can have a later onset than was originally thought. This poses great difficulty for breeders who may have already bred from animals that they believed to be ‘clear’ from their initial screening. It is generally accepted therefore, that Large Munsterlanders should continue to have their eyes tested annually to ensure that late onset affected dogs do not ‘slip through the net’.

Although it is estimated that the cataract in only one in twenty of affected dogs, will progress to blindness the condition is taken seriously, and responsible breeders take all steps that they can to avoid perpetuating it.

The way that HC is inherited is not known, as it can differ from breed to breed. At present the Animal Health Trust is researching the mode of inheritance in the Large Munsterlander and it is hoped that in the future a reliable DNA test will be developed to show which dogs carry HC. Breeders would then be able to find out which dogs are safe to mate together without producing the disease in any of their offspring. Until a DNA test is available to identify affected and carrier animals, responsible breeders will continue to have breeding stock eye tested regularly under the official BVA/KC scheme, and will only bred from dogs with a current [within 12 months] clear eye certificate.

Hip Dysplasia [HD] is a well known condition in dogs. Dogs are screened for HD by submitting x-ray plates of the hips to a panel of specialists who give each hip a score.

Each breed has a published average score which is the total of all the hip scores ever done divided by the number of dogs tested. The current Large Munsterlander breed average score is 13. In reality the breed average is probably higher as this figure does not account for all the dogs in the breed who are never scored.

Out of the gundogs breeds with up to 999 individuals scored most of the breed averages fall between 9  and 16, so the Large Munsterlanders fare no better or worse than other gundogs.

Elbow Dysplasia [ED]  has only recently been recognized as a problem which may occur in the Large Munsterlander. There appear to be more cases than previously seen, of  Large Munsterlanders which, having suffered pain and inflammation of the elbow joints, have been diagnosed by vets as being affected with ED. Some of these may have exhibited untypical front movement.