I am going to look at different breeds over the coming months. To start with I am looking at Patterdale Terriers as we own one and Nobby is the best. He was extensively socialised from the first day he came home and is now great with all dogs and is happy to have any dogs come and stay without any problem. He does go out walking with us all day so is kept busy and is very happy to just get in his bed at night for a rest and he also loves his agility but this is what I have found out about them from the internet. They are not yet KC recognised but have been around for a long time. 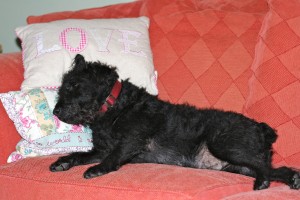 After a hard days work

From Wikipedia, the free encyclopaedia

The Patterdale Terrier is a Dog breed native to the Lake District of Cumbria in Northwest England. The name Patterdale refers to a village a little south of Ullswater and a few miles east of

According to breed standards, this terrier stands between 25,5 cm (10 inches) and 38 cm (15 inches) at the withers and weighs between 4,5 kg (10 pounds) and 11 kg (24 pounds). The preferred size depends on the quarry. In Great Britain, all sizes are in use, depending on the terrain and the quarry. Quarry here is mostly fox. In the eastern United States, smaller is preferred and 30 cm (12 inches) tall and 5.5 kg (12 pounds) is considered the maximum usable size for groundhogs (aka woodchucks). However, larger (9 – 12 kg) is preferred when hunting raccoons in excess of 13 kg (29 pounds).

95% of the breed is black, but bronze (black that shines brown in sunlight), grizzle, chocolate, red, liver (with red nose)and black-and-tan are also acceptable. White feet and white chest markings appear in all coat colours. Coats are smooth, rough, or broken-coated. However, this breed is rarely shown and breeders are more concerned with the practicality of the breed than with outward appearances. Practicality means strong neck, jaws, and teeth; staying power at bay; ability to squeeze into tight burrows; durability and endurance; and peaceful with humans, livestock, and other dogs.

Most Patterdale puppies are bold and confident beyond their capabilities, and therefore are never, or briefly, entered to rats as they soon lose all caution when confronted with quarry of any size. Many a bold pup has lost his life in a raccoon den while on a casual walk-in-the-woods in the States. They have great stamina and can work quarry all day, or play all day with the kids. Yet, indoors they are relaxed and quiet. They have been exported abroad notably to the States where they appear to be used primarily as hunting dogs.

An excellent book about the origin of the breed and fell terriers in general is The Fell Terrier by D. Brian Plummer from The Boydell Press. Plummer goes into depth describing the land and the people that shaped the big dog in the small package currently called the Patterdale Terrier.

The Patterdale Terrier of modern times refers to the mainly black smooth coated fell terrier first popularized by Cyril Breay from Kirkby Lonsdale and Frank Buck from Leyburn in Yorkshire during the early part of the 1950s. At that time, any “typey” fell terrier being shown in the Lake District was called a Lakeland Terrier, or simply called a coloured terrier, whether or not they were from Ullswater county. In the early 1960s, Brian Nuttall of Holmes Chapel began breeding dogs that he acquired from his grandfather and from Breay and Buck blood lines. These dogs were carefully linebred. Nuttall blood lines are still considered to be of the highest quality and adds a bit to the price of a puppy. The modern Patterdale Terrier is to fell terriers, what the Jack Russell Terrier is to hunt terriers—the indisputable leader in numbers and performance as a breed.

They were developed in the harsh environment in the north of England that is unable to sustain agriculture and too hilly in the main for cattle. Sheep farming is the dominant farming activity on these hills. Foxes being perceived by farmers to be predatory on sheep and small farm animals, terriers are used for predator control. Unlike the hunt terriers to the south, typified by the Jack Russell terriers of today, which are bred to bolt a fox to continue the chase, or to bay the fox until the fox can be dug to, these fell terriers were bred to bolt the fox or dispatch it, if it chooses to fight. Where much of the “earths” in south of England are an easy dig, much of the north of England includes “earths” too rocky and/or too deep to dig. The fell terriers that survived to pass on their genes, have created a truly “tough as nails” dog.

Some puppies are allowed to chase rabbits, but most tire of chasing any quarry that won’t turn and fight.