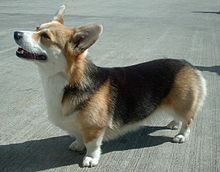 It must be said that life is never dull with a corgi, they are bold, spirited and energetic dogs, and are loyal companions, but do have a tendency to take over the home if you let them. The Pembroke Welsh Corgi is a herding dog breed, which originated in Pembrokeshire, Wales. It is one of two breeds known as Welsh Corgi: the other is the Cardigan Welsh Corgi. The most obvious difference between the Pembroke and the Cardigan is that the Pembroke lacks a tail while the Cardigan has a long tail. The Pembroke usually has straighter legs as it is not quite as long- bodied as a Cardigan; the Pembroke’s head is generally more wedge-shaped; the ears are smaller and closer together than the Cardigans; also the Pembroke tends to be lighter.

Pembroke Welsh Corgis are one of the few natural bobtail breeds with the C189G T box gene. This gene is semi-dominant and lethal in its homozygous form. This gene means that the breed is naturally born with a tail or with a bobtail of varying lengths, but most puppies are docked after birth in countries where it is still allowed. The Kennel Club allow dogs with tails to be shown.

The Corgi is proportional to larger breeds but has shorter legs, but has a sturdy appearance and an athletic body that helps it herd livestock such as poultry, sheep and cattle. They are short so if livestock tries to kick the dog, the hoof goes right over the dog’s head. The pembrokes head should be foxy in shape and appearance, with erect ears

Pembroke Welsh Corgis are 10 to 12 inches (25 to 30 cm) tall from their feet to the top of their shoulders. The length from the shoulders to the set on of the tail is 40 percent longer than their height. Pembrokes in peak athletic condition weigh Male: 22–26.5 lbs (10–12 kg), Female: 22–24.3 lbs (10–11 kg). They reach their full height by 9 months old, but their bodies keep filling out until they reach full maturity at two years.

Pembroke Welsh Corgis are famed for being the preferred breed of Queen Elizabeth II, and have been favoured by British royalty for more than seventy years. it was stated by Off the Leash Pet News on MSN Living online that two of them, Monty (who had appeared in the James Bond scenes in the London 2012 Summer Olympic Games) and Cider (who is half Dachshund) had passed away, leaving only two Corgis, Willow and Holly.

There are five “allowed” colours for Pembroke Welsh Corgis:

Red, with or without white markings, which may appear on the feet and legs, muzzle, between the eyes and over the head as a small blaze, and around the neck as a full or partial collar. Red is the most commonly seen colour as it is the genetically most dominant of the colours.

Sable with white markings, which is like a red but with a light peppering of black.

Fawn with white markings as described above, which is a lighter red (the red can be from a fawn to a deep red)

Black-headed tricolour, (the most recessive colour genetically) which is a black and red dogs with red markings (in the same places you would see tan on a rotteiler) and white markings as described under Red above. A dog would be considered a mismark if they were black and white with no tan present.

Pembrokes should have a “fairy saddle” marking on the side of their shoulders caused by changes in the thickness, length and direction of hair growth. They have an undercoat of fine soft fur and an overcoat of coarse hair, which makes their coat water resistant. Their coat should be medium length with a little extra on the chest plate.

The Pembroke Welsh Corgi has a double coat with medium length hair and are fairly heavy shedders. In addition to their regular shedding, they shed their coats t twice a year (in the spring/autmn).

Faults in the breed include: “fluffies” who have long hair, and “bluies,” which is a dilute colour with light eyes. These dogs make equally great pets but should not be bred from. Other faults include smaller toy-like Corgis, obviously oversized dogs, and Corgis with all short hair.

The Pembroke Welsh Corgi is highly intelligent, loyal, able and willing to please their owners. Corgis are extremely active and usually good with children so long as the dog sees humans as above him in the pack order. Protective and sturdy, they make fine guards, and excellent show and obedience dogs. Wary of strangers, they need to be properly socialized and trained when still young. They need their humans to have a determined, consistent loving approach, showing firm but calm leadership with proper human to canine communication to avoid over-protective behaviours as an adult.

An unfortunate aspect of their herding nature is that they will sometimes try to herd people by nipping at their heels, although they can and should be trained not to do this.

The Pembroke tends to bark a lot and makes a good watch dog. If you find your dog is barking at you in order to communicate you need to hush the dog and look into your leadership skills. A dog that is barking at you in that manner is showing signs of dominancy issues. The human handlers need to communicate to the dog that aggressiveness with other dogs is an unwanted behaviour.

The Pembroke Welsh Corgi lineage has been traced back as far as 1107 AD. It is said that the Vikings and Flemish weavers brought the dogs with them as they traveled to reside in Wales.As far back as the 10th century, Corgis were herding sheep, geese, ducks, horses and cattle as one of the oldest herding breed of dogs. Pembrokes have proven themselves as excellent companions and are outstanding competitors in sheepdog trials and dog agility.

Pembroke Welsh Corgis may be descendants of Swedish Vallhund Dogs, Schipperke, Pomeranian, and other Spitz-type dogs. Pembrokes and Cardigans first appeared together in 1925 when they were shown under the rules of The Kennel Club in Britain.Pembroke Welsh Corgis are becoming more popular in the United States and rank 22nd in American Kennel Club registrations,as of 2006.

A fun legend put forward by some is that the Pembroke is an “enchanted” dog,  ‘Tis said he was used by the fairies and elves of Wales to pull fairy coaches, work fairy cattle, and serve as a steed for the fairy warriors. Even today those people with keen eyes and understanding hearts may see the marks of the “fairy saddle” in the coat over the shoulders.

Pembrokes have an average life expectancy of 11-12 years  Like people, every animal can be susceptible to certain physical problems as they get older. Pembroke owners must not indulge their dogs by feeding them too much, which can be a hard task to accomplish. Other health problems may include degenerative myelopathy ( spinal cord problem) hip dysplasia, and Von Willebrand’s disease ( blood disorder) if their parents suffered from the same problems. Other genetic disorders sometimes found in the breed are progressive retinal atrophy, retinal folds, persistent pupillary membranes, cataracts, cancer and autoimmune system problems, plus uterine inertia during whelping, and sterility in males. A responsible breeder will have tested the parent for the available genetic disease, and will not breed from affected animals.