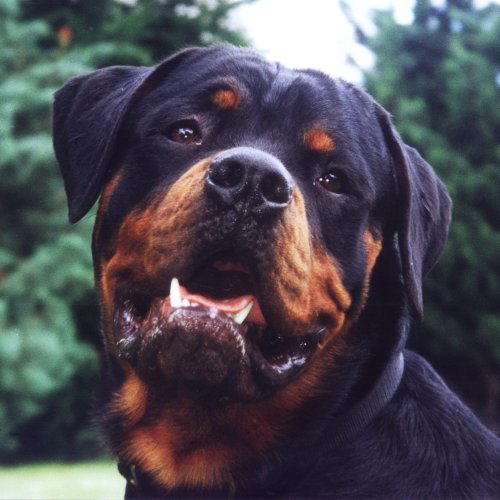 The Rottweiler is a medium to large breed. The dogs were known as “Rottweil butchers’ dogs” because they were used to herd livestock and pull carts laden with butchered meat and other products to market. It’s a versatile breed used in recent times for many purposes, the Rottweiler is primarily one of the oldest, if not the oldest of herding breeds. A multi-faceted herding and stock protection dog, they are now also used as search and rescue dogs, as guide dogs for the blind, as guard dogs or police dogs, and in other roles.

Rotties make loyal and quite undemanding pets, but crave human affection and to be a dependable pet, need to be treated as being part of their family, just like any other dog.

The breed’s history likely dates to the Roman Empire. In those times, the Roman legion traveled with working dogs to herd the cattle needed to feed the army. One route the army traveled was through Württemberg and on to the small market town of Rottweil. The principal ancestors of the first Rottweilers during this time are believed to be the Roman droving dog, local dogs the army met on its travels, and dogs with molosser (mastiff) appearance coming from England and the Netherlands.

The Rottweiler, which first appeared in Britain in 1936 and was shown at Crufts the following year, is medium to large, very agile, black-and-tan dog. Extremely strong and imposing, Rotties are easily obedience trained and enjoys working, but it in obedience, learning tricks or in a more traditional role; rotties love to please their family. Rotties are naturally protective, but they are not aggressive by nature. However like any other trait, in a dog eager to please this instinct can be increased with training. The rottie expression is tranquil and kind, but when aroused, it can hold its own with any opponent.

Rotties are not a dog for the inexperienced. In order to be a social family pet, like any other dog they need training and need to feel comfortable being a lower member in their pack. A rottie confident in its owners ‘top dog’ status is happy and a joy to own. A dog that feels itself ‘in charge’ can be aggressive in its protection of its home and possessive of its food/toys. However amusing a small dog snarling and growling at people seems to be from TV clips, a rottie doing the same is not in the least funny, and could result in serious injury. Rotties need to be trained properly, consistently and firmly, but never aggressively.

The Rottweiler has been much maligned in recent years, when the breed became over-popular, and Rottweilers were often purchased to feed a macho image. Trained to roar at strangers they were given the name ‘devil dog’ by the press, and many owners of well socialised, well trained family dogs felt victimised.

It is a fairly active dog that needs plenty of exercise, but is not frantic in the same way os some spaniel or terrier breeds. Essentially whatever you want to do your Rottie will want to be involved, from family picnics, to hill walking, hauling carts or logs in competition or snoozing in front of the fire on rainy days.

His smooth coat requires only short periods of regular grooming to keep it in the desired shining condition, although they do have one or two shedding periods a year, when everything will be covered in hair

Rottweilers are a relatively healthy, disease-free breed. As with most large breeds, hip dysplasia can be a problem. For this reason the various Rottweiler breed clubs have had x-ray testing regimes in place for many years. Osteochondritis Dissecans, a condition affecting the shoulder joints, can also be a problem due to the breed’s rapid growth rate. They can also suffer with cruciate ligament problems.

As with any breed, hereditary conditions occur in some lines. Because of recent overbreeding, cancer has become one of the leading causes of early death in Rottweilers. For unknown reasons, Rottweilers are more susceptible than other breeds to become infected with parvovirus, a highly contagious and deadly disease of puppies and young dogs. Parvovirus can be easily prevented by following a veterinarian’s recommended vaccine protocol.

If overfed or under exercised, Rottweilers are prone to obesity. Some of the consequences of obesity can be very serious, including arthritis, breathing difficulties, diabetes, heart failure, reproductive problems, skin disease, reduced resistance to disease and overheating caused by the thick jacket of fat under the skin.

Average lifespan is 9 to 10 years, and exercise should be controlled during the rapid growth phase up to a year old. Rottieweilers usually reach their full size by around 18 months to 2 years old.