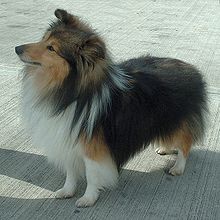 The Shetland Sheepdog or ‘Sheltie’ is loyal, willing and eager to please, making a wonderful companion dog. The breed is generally docile and alert with a pleasant temperament. Loving, loyal and affectionate with its family, this breed needs people. Socialize them well starting at puppyhood. They are good guard and watchdogs. Sensitive to the tone of your voice, they will not listen if they sense you do not mean what you say, or if you are too harsh. They are very intelligent, lively and trainable, as they are so intelligent they need to occupy their minds, they like to be kept busy. The Sheltie is above all an intelligent herder, and the instinct is still very strong in many of them, they love to chase things including cars. A Sheltie should not be allowed to run free near a road as it may decide to chase a car or something else it sees across the road, running a high risk of getting hit by a car. Because of its beauty and kindness, the Sheltie has become a popular companion dog.

They can become suspicious with strangers, especially with children. They may not allow themselves to be touched by strangers and will display noisy persistent barking, as they tell the humans to leave them alone. This can lead to guarding, snapping and even biting. They may hide behind something, barking persistently when company arrives. The dog needs to be told this is not an acceptable behaviour.

The Shetland Sheepdog looks like a miniature copy in of the rough Collie. When viewed from the side, the head looks like a blunt wedge, with the muzzle tapering slightly from the ears to the nose, and a slight stop. The teeth meet in a scissors or level bite. The nose is black. The almond shaped eyes are dark, however blue eyes can appear with a blue merle coat. The small ears are 3/4 erect with the tips folding forward, the neck is arched and muscular. The long tail is feathered, carried straight down, or at a slight upward curve, reaching the hock. Dewclaws are sometimes removed. The double coat is long and abundant all over the body but is shorter on the head and legs, it forms a mane around the neck and chest. The outer coat is straight and harsh to the touch, and the undercoat is soft and tight.

Sable and white–Sable is dominant over other colours. May be pure for sable (two sable genes) or may be tri-factored or bi-factored (carrying one sable gene and one tricolour or bicolour gene).

Tricolour–black, white, and tan. Tricolour is dominant over black and white.

Blue merle—blue, white, and tan. A tricolour with the merling gene. May have blue eyes.

Blue and white. A black and white with the merling gene. May have blue eyes.

Sable merle—faded or mottled sable and white. Often born with a mottled coat of darker brown over lighter brown, they usually present as a faded or lighter sable or can appear as a washed out blue-merle. Sable merles are shown in the breed ring as sables; therefore, blue eyes are a disqualifying fault.

White factoring affects the amount of white on the dog. It is hard to tell, without actually breeding, whether a dog is white-factored or not, though dogs with white going up the stifle (the front of the hind leg) are usually assumed to be white-factored. Breeding two white-factored dogs can result in colour-headed whites–Shelties with coloured heads (sable, tricolour, black and white, or blue or sable merle) and white bodies. Since dogs with more than 50% white are heavily penalized, they are not shown in the breed ring, but are perfectly normal in every other way.

The first known record of the Shetland Sheepdog being known as a separate breed was in 1840 when an engraving was produced of the town of Lerwick. On it is a picture of the Sheltie and an acknowledgement that the dog had been known on the isles for 100 years. The actual mix of dogs that developed the breed remains a mystery.  While the collie was obviously involved, other breeds such as Northern Spitz, Pomeranian, Icelandic Yakkie, etc. may have contributed genes.

The Shetland Sheepdog breed originated from 19th century native dogs inhabiting the Shetlands Islands. Hardy, smaller versions of various animals such as the Shetland pony and diminutive cattle were perpetuated to endure the comparatively harsher climate and terrain compared to the mainland. Livestock typically were allowed to forage freely, while the few cultivated crops were protected in walled gardens on the tiny “toons” (derived from the Norwegian word “tun” for farm) or unfenced. However, the nimble island animals were noted for jumping over the stone walls to graze on the crops.
By the mid 19’th century, the Shetland islanders began breeding agile, small dogs which they called “Toonies” to keep the ponies and sheep out of their crops as well as to work to work sheep. In addition to fishing, one of the main occupations was raising Shetland sheep whose long soft wool was in worldwide demand. During the summer, herds were often transported via ferry to the smaller outlying islands. The sheep were left with the dog placed in charge while the crofter made occasional checks. The stock were rounded up in the fall by the dogs then brought back to the main island.
By around 1890, the Toonies numbers began diminishing which alarmed British dog fanciers . Sailors from whaling vessels reportedly had taken many of the dogs away to function as ship dogs or gifts to loved ones at home. Furthermore, economical changes were placing importance on other types of herding dogs.  The Scottish and English breeders set about preserving and defining the breed. Standard collies were often bred in to achieve uniformity in size, coat, and other attributes. In 1908, the Shetland Collie Club was founded in Lerwick to perpetuate the breed while the Scottish Shetland Sheepdog Club was established in 1909.  The Kennel Club recognized the breed in 1914 with the official breed name of Shetland Sheepdog.  The Shetland Collie term was dropped due to the objections of collie fanciers.

For the most part, Shelties are athletic and healthy. Like the Rough Collie, there is a tendency toward inherited malformation and disease of the eyes. Each individual puppy should have his eyes examined by a qualified veterinary ophthalmologist. Some lines may be susceptible to hypothyroidism, epilepsy, hip dysplasia, or skin allergies.

Shelties are also highly susceptible to Transitional Cell Carcinoma (TCC). TCC is a cancer of the bladder, and can be diagnosed early by regular urinalysis from a normal veterinarian. Causes are debated between breed susceptibility and female gender and exposure to insecticides.

Dermatomyositis may occur at the age of 4 to 6 months, and is frequently misdiagnosed by general practice veterinarians as mange. The disease manifests itself as hair loss on the top of the head, around the eyes  and forearms as well as the tip of the tail. If the disease progresses to its more damaging form, it could affect the autonomic nervous system and the dog may have to be euthanised. This disease is generation-skipping and genetically transmitted, with breeders having no clear methodology for screening except clear bloodline records. Deep tissue biopsies are required to definitively diagnose dermatomyositis.

Von Willebrand disease is an inherited bleeding disorder. In Shelties, affected dogs as a general rule are not viable and do not live long. The Sheltie carries type III of von Willebrands, which is the most severe of the three levels. There are DNA tests that were developed to find von Willebrands in Shelties. It can be done at any age, and it will give three results: affected, carrier and non-affected.Shelties may also suffer from hypothyroidism, which is the under-functioning thyroid gland. Clinical symptoms include hair loss or lack of coat, over or under-weight, and listlessness.

Hip dysplasia has been identified in Shelties and is thought to be genetic.

Collie eye anomaly is recessive inherited trait, seen almost exclusively in Collies, CEA can be detected in young puppies by a veterinary ophthalmologist. The disease affects both eyes. Signs of CEA in shelties are small, or deep set eyes. That is, the severity of the disease at birth will not change throughout the dog’s life. CEA is scored similar to the way hips are.  Breeders should actively try to breed this disease out by only breeding with dogs that have “clear” eyes or very low scoring eyes.A CEA score considered too high to breed with may still be low enough not to affect the dog’s life. These dogs live happy and healthy lives as pets but should be not used for breeding.

PRA can be detected at any time but usually does not show up until the dog is around two years of age. Breeding dogs should be tested for this condition before breeding and only animals found “clear” should be used for breeding. As the name suggests, it is a progressive disease which will eventually result in total blindness. Like CEA, an affected dog should not be bred with but these dogs can live happily as pets. Currently there is no treatment for either disease, but as both diseases (CEA and PRA) are hereditary it is possible to eliminate them using selective breeding.