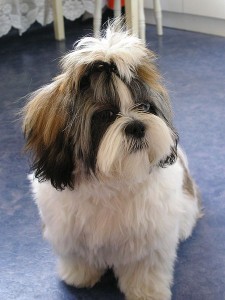 The name Shih Tzu comes from the Chinese word for “lion dog” because this kind of dog was bred to resemble “the lion as depicted in traditional oriental art,such as the Chinese guardian lions. (The Pekingese is also called “lion dog” in Chinese.) The Shih Tzu is also known as the “Xi Shi dog” because Xi Shi was regarded as one of the most beautiful women of ancient China.Shih Tzu were nicknamed the Chrysanthemum Dog in England in the 1930s.The breed can also be referred to as the Tibetan Lion Dog, but whether or not the breed should be referred to as a “Tibetan” or “Chinese” breed is a source of argument, the absolute answer to which is probably impossible to prove.

The Shih Tzu is an alert, lively, little dog. It is happy and hardy, and packed with character. The gentle, loyal Shih Tzu makes friends easily and responds well to consistent, patient training. It makes a very alert watchdog. It is courageous and clever. Playful and spunky, this affectionate little dog likes to be with people and is generally good with other pets. Some can be difficult to house train. The Shih Tzu needs all of the humans in the house to be pack leaders, with the rules of the house made consistently clear. Owners who allow their dogs to take over may find them to be snappish if they are surprised or peeved. Because of this dog’s small size and its adorable face, it commonly develops Small Dog Syndrome ( see separate article on this site), human induced behaviours where the dog believes he is the boss of humans. This causes a varying degree of behavioural issues, such as, but not limited to separation anxiety, guarding, growling, snapping, and even biting. These dogs may become untrustworthy with children and sometimes adults, as they try and tell the humans what THEY want THEM to do. They will be obstinate as they take their stand and defend their top position in the pack. They may bark obsessively as they try and TELL you what they want. These behaviours are NOT Shih Tzu traits, but rather behaviours brought on by the way they are treated by people around them.

The Shih Tzu is a small, sturdy dog with a body that is slightly longer than it is tall, with large dark eyes. The breed should carry itself “with a distinctly arrogant carriage”. A very noticeable feature is the underbite, which is required in the breed standard.

The head is round and broad, and wide between the eyes. The square muzzle is short, with an inch or less from the tip of the nose to the defined stop. The nose is broad, with well-open nostrils. Nose, lips and eye rims are liver on liver coloured dogs, blue on blue dogs and black on all other colours. The teeth meet in a level or under bite.Drop ears are covered with long fur, and the heavily furred tail is carried curled over the back

The back is level. The muscular legs are straight and well-boned. The high-set tail is carried over the back and is covered in abundant hair. Dewclaws are sometimes removed. The double coat is dense and long, flowing down over the dog. The hair above the eyes is often tied in a topknot. There is a profuse beard and moustache and the hair on the muzzle is short. Coat comes in all colours, though a blaze of white on the forehead and tip of the tail is frequently seen. The traditional long silky coat, which reaches the floor, requires daily brushing to avoid tangles. Because of their long coat and fast-growing hair, regular grooming is necessary, which may be costly and should be considered when looking at this breed. Often the coat is clipped short to simplify care. For conformation showing the coat must be left in its natural state, though trimming for neatness around the feet and anus is allowed.

Sixteenth century documents and paintings show dogs resembling the Shih Tzu. The Shih Tzu is said to have descended from crossing the Lhasa Apso or Tibetan mountain dog and Pekingese, in the city of Peking in the 17th century.  The Shih Tzu club in Great Britain maintains the breed is of Tibetan origin, but were given to Chinese royalty, and were so prized that for years the Chinese refused to sell, trade, or give away any of the dogs.

It was not until the 1930s that the first pair was imported to England, when it was discovered by English soldiers during World War II. and were classified by the Kennel Club as “Apsos”. The first European standard for the breed was written in England in 1935 by the Shih Tzu Club, and the dogs were re-categorised as Shih Tzu and recognised by the KC in 1946. The AKC recognized the breed in 1969.

The breed is now recognized by all of the major kennel club, and is in the ‘utility’ group in the UK and the toy group in America.It is also recognised by the Fédération Cynologique Internationale for international competition in Companion and Toy Dog Group, Section 5, Tibetan breeds.

A number of health issues, some of them hereditary, have been found in individual Shih Tzu, and are listed below. There is no data on the percentage of dogs with these ailments. UK Kennel Club survey puts the median life span of a Shih Tzu at 13 years 7months, with most living between 10 and 20 years. Litter size can range from 1 to 8 pups.

Hypothyroidism occurs when the thyroid gland malfunctions and stops producing a hormone responsible for proper metabolism. This malfunction is commonly attributed to immune system problems. It usually affects middle-aged dogs and is seen in all breeds. Symptoms include hair loss, weight gain, muscle loss, and lethargy. This disease is usually diagnosed through blood tests. It can be effectively treated with drug therapy.

Other health issues in the breed are portosystemic shunt of the liver and hip dysplasia. There have been cases of Shih Tzu being epileptic, which in turn may shorten the life span if untreated.