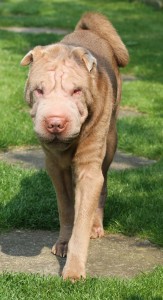 We decided to get a Shar Pei as they are couch potatoes, likes short walks, are medium sized dogs, with little moulting and grooming required.  Henry was the compromise dog between a Japanese Akita and a French Bulldog!!!We viewed him with his mother and his litter mates at home when he was 8 weeks old. He picked us as he made a beeline for Tim’s shoe laces and seemed quiet happy chewing the furniture.  We instantly fell in love with him and collected him week later.We were warned of all the negatives to having a Shar Pei, entropian,allergies, temperament, familial Shar Pei fever, swollen hock syndrome and amyloidosis.  We never thought that Henry would have the problems he has, coming from a home breeder that is KC registered, and having the pedigree he has.Henry isn’t the most wrinkly of Shar Pei but, to date, he has had 3 entropian correction operations on both his eyes, a hernia operation, has food allergies so he cant be fed commercial dog food so we have to make his food from scratch.  He is on 1 Atopica tablet and 4 Piriton tablets daily to help with his allergies.  He has to wear a cone when left on his own as he   scratches himself so badly that he breaks his skin and, because he’s allergic to the bacteria and yeast naturally present on his skin, he flairs up dreadfully. When we walk him, he is often attacked by other dogs as they can’t  read him because his face is wrinkly. The tail, which is carried high, makes dogs think that he is agressive and he also makes grunting noises which people think is him growling.  All that said, Henry is a character of his own.  He is stubborn, has selective hearing(like most men!), loves to be pampered, play, cuddle loads and is a great house dog.  He is the most clumsy dog you could ever meet and has even been know to walk into patio doors!!!

We will update you on Sir Henry’s progress..