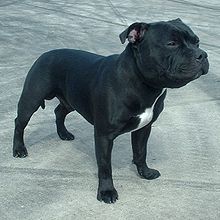 The Staffordshire Bull Terrier does everything full throttle: play, work and love. It is extremely courageous and obedient, affectionate with a sense of humour. The breed is people loving and its reputation with children is second to none. Adored and adoring within its own family circle, it tends to greet everyone enthusiastically, it doesn’t make a good guard dog.Staffordshires are certainly not the pet for people who prefer quiet or reserved pets. Staffords are usually good with other pets in the household, but  may often be combative with dogs outside the family.

They are intelligent, persistent and active, although not a good swimmer. As a puppy they tend to chew a great deal so make sure you provide them with plenty of chew toys. Their powerful jaws will tear though vinyl toys to get to the squeaker in no time. This can be dangerous if the dog swallows the plastic. Be sure to only give your Staffie strong toys. Do not let puppies chew on human hands. Do not allow it to be off its leash unless it is safe to do so, be particularly aware of the presence of other dogs. Like many terriers, they have a strong vermin hunting drive and may take off after rabbits and other small furry animals.

They can be trained for agility and competitive obedience. The breed competes in agility and obedience in the UK at the highest level. Staffie’s love a challenge and variety. Owners need to protect these dogs from injuring themselves. Totally fearless and curious, they’re liable to jump off of a deck or walk through broken glass.

The Staffordshire Bull Terrier is a muscular dog, very strong for their size. The head is short and deep with a broad skull, short foreface, distinct stop and strong jaws. The nose is black. The teeth meet in a scissors bite. The lips should be tight and clean. The round eyes are dark in colour, in relation to the coat. The somewhat small ears are either rose or half pricked. The front legs are straight, and the paws are medium sized and well padded. The low-set tail is thicker at the base, tapering to a point, carried low. The tail should not curl much and may be likened to an old fashioned pump handle. The smooth, short coat comes in red, fawn, white, black or blue, or any of these colours with white and in any shade of brindle with or without white markings. Currently ‘blue’ staffies are very much the fashionable colour, with the price for blue pups far exceeding that for black or brindle individuals even in the same litter.

Like most breeds there are few health problems staffies are more prone to, particularly eye complaints such as cataracts, HC & PHPV  although through screening of both parents this can be avoided. DNA work in the UK is very nearly complete as to cure this (people should ensure they buy from eye tested parents, and that puppies are screened at a few weeks old. Hip dysplasia is occasionally seen and so are tumours. Puppies are prone to having an elongated soft palate. Like all the bully type breeds, Staffordshire Bull Terriers often have gas problems.

The Staffordshire Bull Terrier first came into existence in or around the seventeenth century. As bull baiting declined in popularity and dog fighting enjoyed a surge of interest, it became necessary to develop a dog which possessed a longer and more punishing head than the Bulldog and also to combine strength and agility. It is therefore believed that the Staffordshire Bull Terrier was derived from the fighting Bulldog of the day with some terrier blood introduced. This cross produced what was known as the Bull and Terrier or Pit Dog. These dogs were renowned for their courage and tenacity and despite their ferocity in the pit were excellent companions and good with children.

Although dog fighting and other barbaric pastimes of the day were patronised by the aristocracy – Lord Camelford reportedly owned a famous dog called ‘Belcher’- fighting dogs were also owned by the poorest of families. The pit dog was a favourite with miners and steelworkers and was prevalent amongst the chainmakers of the ” Black Country ” where the dogs were not only fought for entertainment but provided a working man with valuable extra income when worked against badgers or as ratters. With the introduction of the Humane Act in 1835, baiting sports and dog fighting became unlawful and a group of men in the Staffordshire area endeavoured to preserve their breed by introducing them to the show world. The Staffordshire Bull Terrier was officially registered by the Kennel Club in 1935. The popularity of the breed has now spread abroad with well established clubs in many countries including Australia, Eire, France, Germany, Holland, Spain and the USA, to name but a few. Over the years the Staffordshire Bull Terrier has become a successful show dog and a serious contender in the Terrier Group, where they frequently have the highest number of entries of all dogs in the Terrier Group and are occasional winners of Best in Show. More importantly the Stafford has become a popular pet retaining the attributes gained from generations of fighting dogs bred for courage, tenacity and most important: total reliability and affinity with people and in particular children.

Despite their obvious popularity the number of staffies and staffie crosses in rescue in the UK is reaching desperation point. Staffordshire Bull Terriers and SBT crosses are being over-bred meaning that every year thousands of them are left without homes, ending up in Council Pounds or Rescue centres and some suffering an even worse fate – being ‘put to sleep’ simply because they have nowhere to go. According to the Dogs Trust, eighteen stray dogs are put to sleep daily, and a great deal of these are happy, healthy, staffs and staff crosses. This adds up to around 7,000 dogs being euthanised every year in the UK (and over 10,000 in Ireland) after their 7 days in the pound is completed. Sadly, they are discarded like a waste product of our society. However Rescue spaces are hard to find for Staffies these days, as most are either already full of Staffies or are having to limit the amount they can care for at one time.

Who’s fault is it?

The rescue workers do their best to find home for these dogs, but the fault must lie with the people in our society who allow their dogs to breed with no proper thought or care given to where those puppies might end up, and the people who take on a dog without thinking seriously about whether or not it is right for their lifestyle.

Like with any other dog, think carefully before giving a puppy a home, look for a reputable breeder, who knows and loves the breed. Buying the cheap puppy in the paper may well save that  particular individual from being unwanted, however if the unscrupulous breeder sells all puppies, whats to stop them doing it again and again, producing more and more poorly bred dogs to end up in the pound. Rather than buy a cheap staff pup, instead consider giving a home to one of the hundreds of perfectly good staffies in rescue, doomed to be PTS, because their original owner didn’t consider the energetic, people loving nature of this wonderful breed.