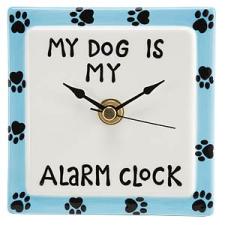 Many dogs instinctively know when their owner usually comes home from work every day, or what time they can expect their regular meals. But does this mean that dogs perceive time the same way humans do?

There isn’t a great deal of research specifically about how dogs perceive time, however it’s possible to make several assumptions based on memory research in other species, such as rodents, birds and primates. William Roberts, a researcher in the field of animal intelligence made some remarkable conclusions regarding animal memories and anticipation. He concluded that animals are “stuck in time” meaning that, without the sophisticated abilities it takes to perceive time, like true memories, animals only live in the present. Roberts thinks animals are “stuck in time” because they can’t mentally “time travel” backward and forward. Ceaser Milan has a similar philosophy when he states that dogs ‘live in the moment’.

Humans can consciously think back to specific memories and anticipate events. Animals cannot.

However many people might argue that animals must be able to remember, because animals can be trained and training depends on the animals’ memories.

Roberts claims that animal memory is quiet different to human conscious memory. He claims that animals use memory to learn in the same way that very young children learn. According to studies on children, by the age of four, kids have learned lots of things — crawling, walking, drinking out of cups, to use the toilet and speak — but without the mental ability to remember where or how they learned them. In other words, they don’t have the ability to remember particular events in the past, known as episodic memory. For example,  dogs can know how to respond to the command “sit” without having a memory of the specific event in which it learned that command.

So how does a dog know when its owner is due to come home, or when it is meal time? Internal biological rhythms play a significant part in the lives of animals. Researchers have discovered from experiments on pigeons that an “internal clock” allowed them to learn when and where food would be available. Similarly, dogs might use circadian oscillators (daily fluctuations of hormones, body temperature and neural activity — to know when food is likely to hit the bowl or when owners are likely to return from work. Instead of remembering how much time passes between meals or what time meals are given, dogs react to a biological state they reach at a particular time of day. And they react the same way at the same time every day to this stimulus.

Understanding the idea of ‘future’

We are able to remember a sequence of events and we are able to anticipate future needs or events. Studies show that animals may have these abilities — but to a lesser extent.

Scientists have tested animals’ short-term memory and long-term memories to see how well the animals recall sequences of events. In short term memory tests, pigeons and primates can remember a sequence well enough to peck or pick it in the right order again to get a reward, but their memory fades quickly. Roberts thinks they were probably learning going from weakest memory to strongest memory, rather than actually “learning” or “remembering” a sequence.

Other researchers found that pigeons and monkeys performed well at long term memory tests in which they needed to remember a sequence after a delay between learning and testing. However, it took extensive training for the animals to learn these sequences, suggesting that the ability does not come naturally to them. From these tests, it seems that animals perceive time differently from humans, who have a sophisticated memory of sequence of events.

In addition, animals don’t seem to anticipate future needs and rewards very well, suggesting to that they don’t have a concept of the future. For instance, when given the choice, pigeons and rats chose a smaller immediate reward over a larger future reward. In one test, researchers presented primates with a choice between one banana and two bananas. Understandably, they chose two bananas consistently. However, as the supply of the two choices got larger, they started showing less of a preference — they weren’t hungry enough at that moment to eat 10 bananas, so they chose five bananas half the time.

Roberts concludes from these experiments that these animals sought to satisfy immediate hunger needs, and were not planning for future hunger. So what about animals that hoard food for the impending winter months? That behaviour seems to imply the animals anticipate future needs. However studies have found that animals don’t stop hoarding even when their supplies are added to, enough to feed an individual for a hundred winters. This could mean the animals don’t understand why they hoard, what it means for their future or even what future is. They simply do it out of instinct.

If animals are “stuck in time,” as Roberts suggests, this could mean understanding time is uniquely and fundamentally a human ability. Understanding how a dog’s mind works, can make the relationship between human and dog a much happier one for both parties.

Dogs have remarkable abilities, but as their loving owners, we often tend to inflate their skills and project human characteristics onto our canine friends. It is very tempting, when we see our dogs predict dinnertime accurately, without the aid of a clock, we could assume that their perception of time is even superior to our own. And though it might be true that dogs are more in tune with their circadian oscillators, evidence indicates that their understanding of time is not nearly as complex as ours.