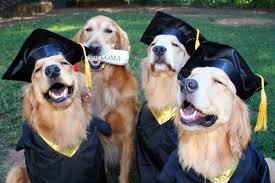 Animals have been submitted as applicants to suspected fraudulent educational establishments to prove the lack of checks these institutions go through before issuing diplomas and degrees, with obviously no studying, or examinations taking place. Fortunately it seems that for us in the UK, we only have to worry about feline hypnotherapists rather than dogs with masters degrees in business studies. However if you’ve ever looked into a cat’s eyes, you can understand where their coming from!

It was alleged that in 2007 during a  Ohio drug trial that police dog (John I.) Rocko received the same criminal justice Bachelor’s degree from Concordia College and University as local Police Chief John McGuire. At the time, McGuire was being sued and investigated for allegedly lying on his resume and application for the job of chief.

In 2010, Mark Howard QC, a member of the legal team for the defendants in BSkyb Ltd & Anor v HP Enterprise Services UK Ltd & Anor (2010)obtained a degree for his dog Lulu from Concordia College and University. Lulu “graduated” with higher marks than the plaintiff’s key witness, who lied that he had attended classes for his Concordia MBA.

In February 2012, Houston, TX television station KHOU reported on local ‘diploma mills’, and their investigative team was able to get a high school diploma and official transcript from Lincoln Academy for their photographer’s basset hound Molly, for $300, and filling in a “laughable”, “easy take-home test”.

In 1984 Time Magazine reported that Sassafras, a female poodle belonging to a New York City physician, had received a diploma from the American Association of Nutrition and Dietary Consultants. Her owner had bought the diploma for $50 to demonstrate that “something that looks like a diploma doesn’t mean that somebody has responsible training.

In 2004 Albany, NY television station WRGB ran a report in which reporter Peter Brancato applied to Almeda University for, and received, an associate’s degree on behalf of his dog, Wally. On the application, Brancato listed “Plays with the kids every day … teaches them to interact better with each other … Teaches them responsibilities like feeding the dog.” Almeda University granted Wally a “life experience” associate degree in “Childhood Development”. In a public statement, an Almeda University representative wrote: “He completed an application that included a background of the following: Eight-years tutoring pre-K children, curriculum design and development, teaching coping skills, and volunteer coaching.

Colby Nolan is a housecat who was awarded an MBA degree in 2004 by Trinity Southern University,  for $299, sparking a fraud lawsuit by the Pennsylvania attorney general’s office. On the cat’s application, it was claimed that the cat had previously taken courses at a community college, worked at a fast-food restaurant, babysat, and maintained a newspaper route. The school informed Colby that, due to the job experience listed on the application, he was eligible for an executive MBA for $100 more.

In 2009, George, a cat owned by Chris Jackson, the presenter of the BBC show Inside Out North East & Cumbria, was registered with three professional organizations, the British Board of Neuro Linguistic Programming, the United Fellowship of Hypnotherapists, and the Professional Hypnotherapy Practitioner Association, securing George’s accreditation as a hypnotherapist.

Ben Goldacre, a UK-based doctor and science journalist, wrote in 2004 of obtaining a diploma in nutrition from the American Association of Nutritional Consultants for his deceased cat, Henrietta, while investigating allegations about the qualifications claimed by Gillian McKeiththe host of ‘You are what you eat’.

In 1973, Florida newspaper The Ledger obtained a high school diploma from “Washington High Academy” for “Kitty O’Malley”. While the diploma was deemed insufficient to gain Kitty admission to local colleges, the state attorney general’s office planned to investigate the institution.[11]

On December 10, 1967, The Times reported that Oliver Greenhalgh had been accepted as a Fellow of the English Association of Estate Agents and Valuers, after a payment of eleven guineas (his two references were not verified). Oliver was a cat belonging to Michael Greenhalgh, a cameraman with Television Wales and the West, pursuing an investigation of bogus professional associations.

Oreo C. Collins (born circa 2007) is black and white cat who gained notoriety when she received a diploma from Jefferson High School Online in 2009, although her age was misrepresented in order to qualify.

In 1986, Rhode Island real estate appraiser Roy Schaeffer obtained a Certified Real Estate Appraiser (CREA) designation for $75 from the Scottsdale, AZ National Association of Real Estate Appraisers (NAREA) for his cat, Tobias F (for “Feline”) Schaeffer. He mounted Tobias’ certification above his litter box. NAREA sued in federal court for fraud and “for disparaging remarks about the organization to members of Congress, other appraisers and the media.” After two years and $70,000 in legal costs, the judge ruled that no fraud or defamation had occurred.

“Dr.” Zoe D. Katze (which has in German the meaning of “Zoe the cat”) is a housecat owned by Steve K. D. Eichel, Ph.D., ABPP. Dr. Eichel was able to obtain several well-known hypnotherapy certifications for his cat, circa 2001. The ease with which “Dr.” Katze obtained these credentials became the subject of an article by the American Bar Association and a news report by CBS News. The certification of “Dr.” Katze has been cited in several books and articles on credentialing scams, and has appeared in psychology and forensic curricula. Dr. Eichel also served as the consultant to the BBC investigation that ultimately led to the certification of George the cat (see above) by various U.K. hypnosis associations.